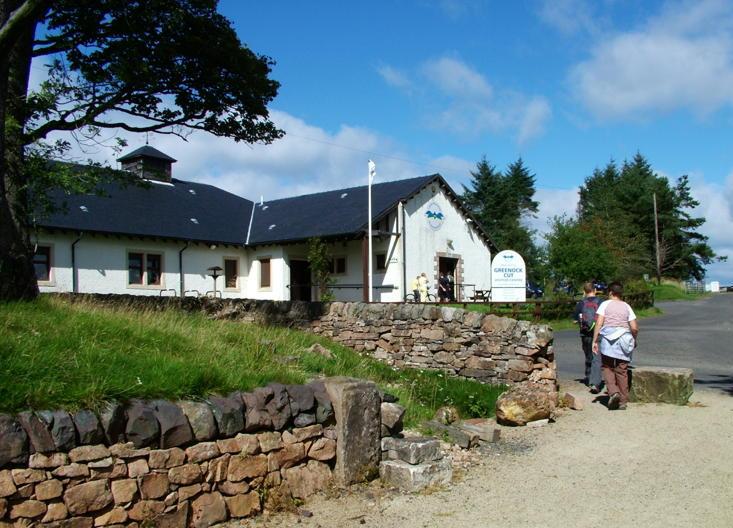 In this cold dark month the sound and sight of honking geese is familiar around the Greenock Cut.  Though resident all year round the numbers of Canada geese swell dramatically in the winter months.  Sleeping soundly on one of the several lochs they fly in to feed in the fields around the visitor centre.  Look closely as amongst the Canada Geese there may be Greylag, Barnacle and Brent Geese too.
Down at Lunderston Bay, look out for grebes and divers, which gather in numbers in the Clyde estuary during the winter months.  It can be harder to identify the different species as their winter plumages are all very similar.

Look out for Roe Deer feeding amongst the Conifer woodland, there is also a chance to see Crossbills, Bullfinches and Siskins.  Crossbills start to nest at this time of year and can be seen at the tops of the conifer trees. Stoats and Foxes can be seen hunting during the day due to the short daylight hours.  Up at the pond there can be lots of activity and sound with male frogs vying for the female’s attention.
At Lunderston listen out for the distinctive call of the male Eider duck. The males and females can be seen floating in large groups called rafts.

The pond is now full of frog spawn and the Toads are starting to gather for their mating period.  The different spawns can be identified as Frogs lay in large clumps whilst the Toads lay in a long string, like pearls.  Palmate Newts also breed in the pond and their individual eggs can be found attached to the underside of the pond vegetation.
Along the Greenock Cut if you see a flash of blue it will be a Kingfisher, which usually starts to breed in this month.
March is a good month to do tree identification as the buds are starting to burst as the winter is drawing to a close.  As Easter approaches the first lambs and calves are seen in the fields.

The summer migrants are starting to arrive back.  Swallows can be seen investigating nest sites in the eaves of the visitor centre, Cuckoos can be heard calling in the glen and with the start of the trout fishing season our own expert fisher, the Osprey, should arrive back from Africa. On the lochs young water fowl can be seen following their parents.
On Loch Thom Island the gull colony is building up in preparation for the nesting season in May. Walking around the nature trail all bird activity should be on the increase as nest boxes are being prospected and the air is filled with the sound of singing male birds such as Chiffchaffs and Willow Warblers. As the sun starts to shine the first Primroses and Bluebells can be seen on the trail.
Down at Lunderston Bay Gannets can be seen diving into the dark waters.  Their numbers are building up as they return to their breeding colony on Ailsa Craig further down the coast.

Look for the first butterflies – over-wintering Peacocks and Small Tortoiseshells appear around the visitor centre, on the trails Orange-tips are one of the first to be seen. The tiny Green Hairstreak can be seen feeding on the Blaeberry flowers amongst the heather moorland.
Flying over the moorland Skylarks can be seen displaying and look out for the flash of white on the rump of the Wheatears as they fly off.  The screeching of Swifts can be heard as they fly amongst the Martins and Swallows. If you are lucky you may see a Roe Deer fawn hiding in the Bracken, their mothers will be somewhere close by and may see you even if you cannot see them.

A flurry of activity is seen in the woods as parent birds are busily feeding their young.  The caterpillars of many moth and butterfly species are munching through the leaves and in turn are a tasty morsel for the hungry birds.
There are now more plants flowering such as Orchids, Bog Asphodel, Dog-Violets, Eye-bright, Wood-Sorrel, Red Campion and Grass of Parnassus. Due to the nature of the ground two types of carnivorous plant, Sundew and Butterwort, are also found at the Greenock Cut.
Hundreds of Moon Jellyfish can be washed up on the beach at Lunderston. They gather in large blooms to breed and after this die and are washed up on the next tide. Manx Shearwaters can be seen gliding over the tops of the sea waves. If you go rock pooling Starfish, Crabs, Sea Slugs, Urchins, Anemones and Butterfish can all be found lurking under stones or in the larger pools.

There are many insects about in this warm month, Damselflies and Dragonflies are on the wing. So too are the Swallows who are catching this prey to feed their young.  Young Frogs and Toads are leaving the pond and can be found under logs, stones and on damp paths. Common Lizards can be seen basking in the morning sun on the nature trail boardwalk and on the Kelly Cut, Green Tiger beetles can be seen chasing prey or buzzing noisily off as you approach them.  On Loch Thom Island the Gull chicks can be seen running around before they get their flight feathers.
Down on Lunderston’s sandy beach the young Oystercatchers, Curlews and other waders will be learning how to catch lugworms and shellfish.

Now is the time to see the largest of our dragonfly species.  The Golden Ringed dragonfly can be seen patrolling along the Greenock and Kelly Cuts or around any small water body. On the moor the Cotton Grass can be seen swaying in the breeze and the heather colours are vibrant.  We also start to see the disappearance of some of our summer migrants. The Swifts gather in large flocks and are the first to leave and the now familiar Cuckoo call dies away as both head home to Africa.

Summer is starting to fade and the trees are slowly changing into their autumnal colours. On the moor the Heather and Bracken turn in colour too.  Now is the time that the Swallows, Warblers, Wheatears and Osprey depart our shores to head to warmer climes. Harebells and fungi grow on the trails, a sure sign that summer is coming to an end.

As some birds depart, others arrive, from Scandinavia – Redwings, Fieldfares and Goldcrests appear in large numbers. They arrive to feed on the abundance of berries on the trees and bushes. If you are out in the dark evenings you can hear the Redwings “seeip”call as they fly over head.  Mixed flocks of tits and finches can be seen hungrily feeding on insects to build up their winter reserves. Take a close look at any Chaffinches you see as there may be a migrant Scandinavian Brambling amongst them.
As the autumn storms start to hit the shores of Lunderston Bay, this is a great time to go beach combing. Mermaid’s purses, Dog whelk cases, Sea Potatoes along with other exotic items, can be found washed up on the beach.

As the dark nights grow longer the familiar sound of the Tawny owl can be heard and the ghostly silhouette of a hunting barn owl may be glimpsed. As the first hard frosts appear bats, frogs and toads will be starting to think about somewhere day to hide away for the winter.

The first snow of the season may arrive and this gives the opportunity to go looking for tracks of various creatures.  Otter tracks and slides can be seen along with the prints of Foxes, Roe Deer and Brown Hare on the trails.  This is also the breeding season for foxes and their eerie blood-curdling screams can be heard drifting across the moors.