This is a good time of year to spot species that are often difficult to find later in the year. On the trees at the back of the centre Treecreepers can be seen climbing spirally up the trunks in search of insects. Long Tailed Tits and Bullfinches are more readily seen now amongst flocks of other tits and finches feeding along the cycle track and in Parkhill Wood. If you look on the sycamore trees or on the wooden fence posts in the wood you can see congregations of orange ladybirds over wintering. This ladybird is orange with 12-16 white spots. 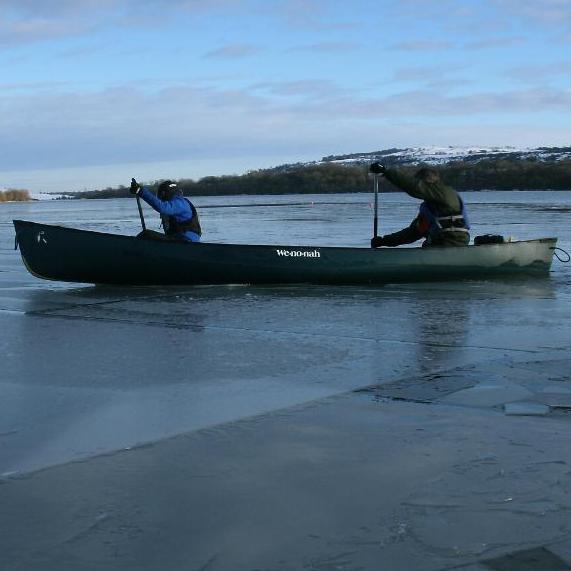 With the loch often being frozen at this time of year it’s an ideal time to see the Moorhens that come onto the grassed areas by the car park to feed. Nearby you can also see Mute Swans, Black-headed Gulls, Greylag Geese and Mallards as well as hearing the Whooper Swans calling. As the sky turns an orangey colour with the setting sun a noisy chorus of cawing Rooks and Crows gather to fly over the Loch to settle into their night roosts. 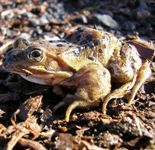 Throughout the month Frog spawn can be spotted in the ponds and ditches in Parkhill wood and the cycle track. In the woods the “drumming” of the Great Spotted Woodpecker can be heard. Each drum is eight to ten quick blows within a second usually on a dead tree. Both sexes do this to mark their territory. Late in the month the call of the Chiffchaff can be heard throughout the wood.Dog’s Mercury carpets the woodland floor and on the cycle track the yellow flowers of Coltsfoot start to appear. If the weather is mild, Soprano Pipistrelle bats will awaken from hibernation, hungry to feed along the tree line in the car park at twilight. Towards the end of the month the Sand Martins arrive back from Africa and are soon joined by the Swallows. They swoop low over the loch feeding on insects and drinking water. The Badgers will have cubs below ground in their sett and it won’t be long until they make their first foray above ground. 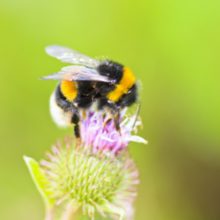 In the woods Goat Willow trees are in flower and they are surrounded with the buzz of Bumblebees feeding on the nectar. Underneath Dog Violets and the bright green Wood Sorrel leaves emerge. In the wetter areas the yellow flowers of the opposite leaved golden saxifrage poke through. On the Loch the House Martins and Swifts have completed their long migration. Swifts spend most of their life on the wing and you can often see and hear them circling high in the sky at dusk. Along the shore the melodious notes of the Willow and Grasshopper Warblers can be heard. It’s also a good time of year to spot the resident Otters on the Loch who like to come out at dawn and dusk. 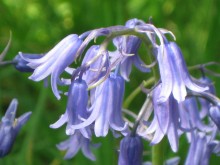 In the early days of the month the air along the Lochshore path is filled with the Mayflies newly hatched from the water. On sunny days Orange Tip and Green-veined White Butterflies flit amongst the flowers. Parkhill Woods are bathed in a haze of Bluebells, closely followed with the emerging purple flowers of the Rhododendron. The ditches on the cycle track are full of the delicate pink and blue Forget Me Not. A German legend says that one day a knight and his lady were strolling along a river bank. The knight bent down to pick a bunch of flowers for her but toppled over into the water due to his heavy armour. As he drowned he threw the posy to his lady crying Vergisz mein nicht! – forget me not! Thus the flower was named.

Along the Lochshore path the purple flowers of the Common Comfrey are being visited by different species of Bumblebees. In the woods the Rhododendron are still ablaze and underneath the yellow flowers of Tuberous Comfrey and the bright green fronds of Bracken are emerging. Nearby the nest boxes are busy as Blue Tits and Great Tits go back and fore feeding their chicks.On the cycle track Tuberous Comfrey, Wild Strawberry and various Vetches grow. The Fox and Badger cubs can often be seen and heard playing outside their homes in the early evening. The Roe Deer have their stunning red coats and twin fawns can be spotted following mum about the wood.

In Parkhill wood by the Grotto pond the yellow and red blotched Monkeyflower grows in the wet flushes. Yellow Flag  and the white flowers of Meadowsweet grow in the wetter ditches along the lochshore path. The folk name for Meadowsweet is courtship and matrimony. The sweet smelling flower represents courtship while the sharp scent of the crushed leaves symbolises the reality of marriage! It was also used on floors in Tudor times to mask other less pleasant aromas! 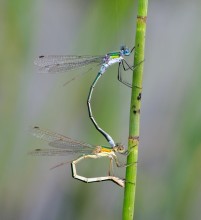 The Johnshill field pond is busy as the Small Red, Common Blue and Blue Tailed dart about the water’s edge, Pondskaters skate across the surface whilst the Whirligig Beetles just go round in circles. On the Lochshore path Meadowsweet, pink Common Valerian are in flower and on the Loch the Yellow Water Lilies hug the shoreline. The tall pink and white Himalayan Balsam was introduced to Britain in the 1840’s. Usually the flowers are surrounded by Bumblebees drinking the nectar. The flower closes over the Bumblebee to help pollination. If you look closely the Bumblebees are usually heavily covered with pollen. When the seed ripens the casing sides spring back and the seeds are forced out over distances of 7metres! This means it spreads very easily especially near water. The cycle track is a riot of colour with yellow Tansy, Orange Hawkweed, white Ox Eye Daisy’s and pink Rosebay Willowherb in flower.

The Swallows and other summer migrants are gathering in flocks to fly away to warmer places. If you are lucky you may see an Osprey stopping off to refuel on its way south.Fungi can be easier to see on the woodland floor and tree trunks. Grey Fire Brackets can be seen on the trunks of birch trees. The small Scarlet Elf Cap glows from rotting wood and the brown jelly like Jew’s Ear can be seen in clusters on branches. You may even find the Common Stinkhorn! You can smell this before you see it, as the fruitbody gives off a foul smell to attract insects to help disperse the spores. As the nights start to shorten Roe Deer may be seen if you take a late evening walk in the wood.

At dusk on the Loch and surrounding trees, Pipistrelle and Daubenton’s Bats are preparing for the long winter months of hibernation by feeding hungrily on insects. Some winter migrant species have arrived, the Fieldfares and Redwings feast on the berries of the Hawthorn bushes on the cycle track after their long journeys from Scandinavia. The Damson bushes are full of fruit which are monitored closely by people waiting for the first frosts so they can make sloe gin! Black and white Tufted Ducks, Goldeneye, Goosander and the brightly coloured Wigeon can all be seen on the Loch diving for food. The plaintive cry of the Whooper swans can be heard echoing over the Loch intermingling with the honking of skeins of Geese. The geese including Greylag and Canada, feeding on the surrounding fields.

With less plant cover this is an ideal time to have a close look at the mosses and lichens that are in Parkhill Wood. The crusty lichens in shades of white, yellow and grey green can be seen growing on the trees. Leafy lichens in various shades and the greyish Bushy lichens can be seen hanging from tree branches. There are also Cladonia species which have erect fruiting bodies, like upright fingers, often with red tips earlier in the year. Mosses are abundant in the wet conditions of the wood. The shades vary from yellow, lime green to dark green. Hummocks of Marsh Hair moss and Fork moss and Whitish green Wavy flat moss and the yellow with red stems Red- stem moss can be spotted.

A quieter time of year but it’s also a good time to spot any animal tracks in the wood. Roe Deer, badgers and fox tracks may all be seen.
The musky smell of where Foxes have been at night can linger in the air in the woods and the car park.