Rufus is an adult male Lesser Black-backed Gull.   He was hand caught at Castle Semple Loch on the evening of the 30th of June.  As he was hand caught we are waiting to see where he heads to.  He weighed in at 860g and has a wing length of 423mm. He can be identified by his colour ring 14W:C.


So we always leave it a few days to see what routine our gulls have after tagging and Rufus, like many of the gulls we captured at Castle Semple, comes from Little Cumbrae.  This island is the main nesting site for gulls.  When he isn’t on the island he seems to like hanging around in Milliken Park. 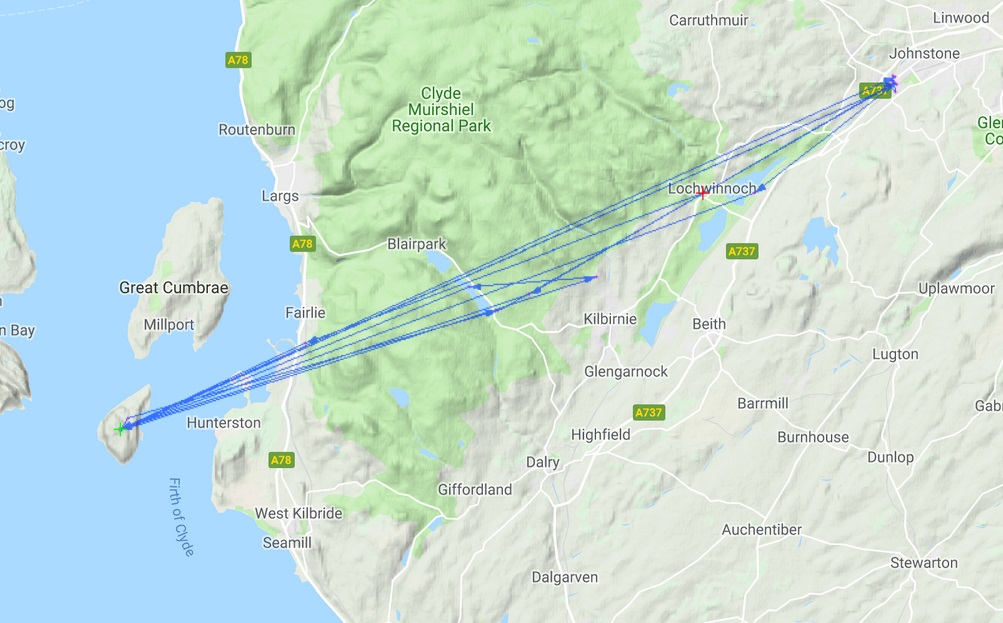 Map updated 13/07/19  Rufus has a pretty regular foraging pattern that we have seen often with the gulls that we tagged at Castle Semple.  He is potentially rearing chicks on Little Cumbrae and his mainland area of choice for foraging is around Miliken Park.  In the last few days he has also visited some of the other rural areas of Renfrewhire. 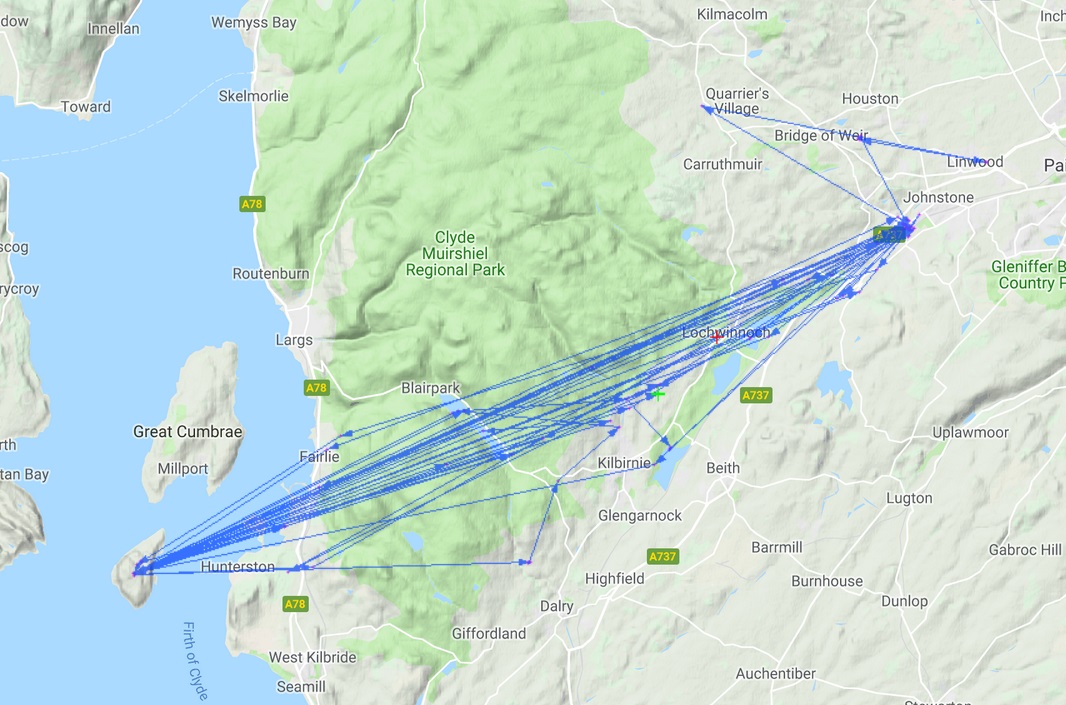 Map updated 23/07/19  Rufus’s foraging and flight pattern is still looking pretty similar although we noticed he went on a flight south of Little Cumbrae into the Clyde before heading back inland to Miliken Park.  We haven’t spotted him at Castle Semple but he has visited us according to his tag. 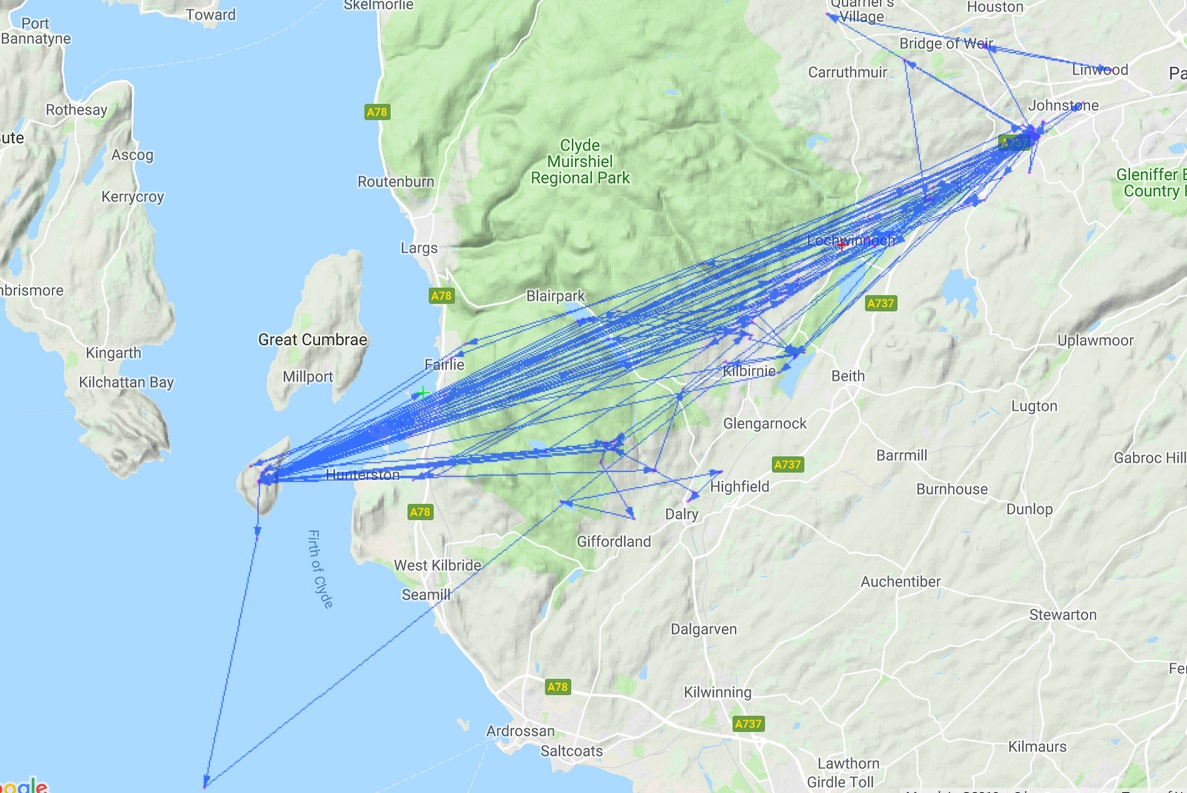 Map updated 01/08/19  Rufus has left Scotland.  He is our second gull this year to migrate and the first of the two new gulls we tagged.  He was picked up on the morning of the 31st of July on Little Cumbrae.  At 1118 he was flying over the south of Arran and an hour later he was off the southern tip of the Mull of Kintyre.  An hour and 40 minutes later he was just of the coast of Northern Ireland at Carnlough.  He continued flying in a south west direction over Buckna, Kells and Antrim where he was picked up at 1626 flying over Loch Neagh. He continued for another hour before slowing down and exploring the area around Lurgan,Portadown and the south banks of Lough Neagh where he was picked up at 0238 this morning. 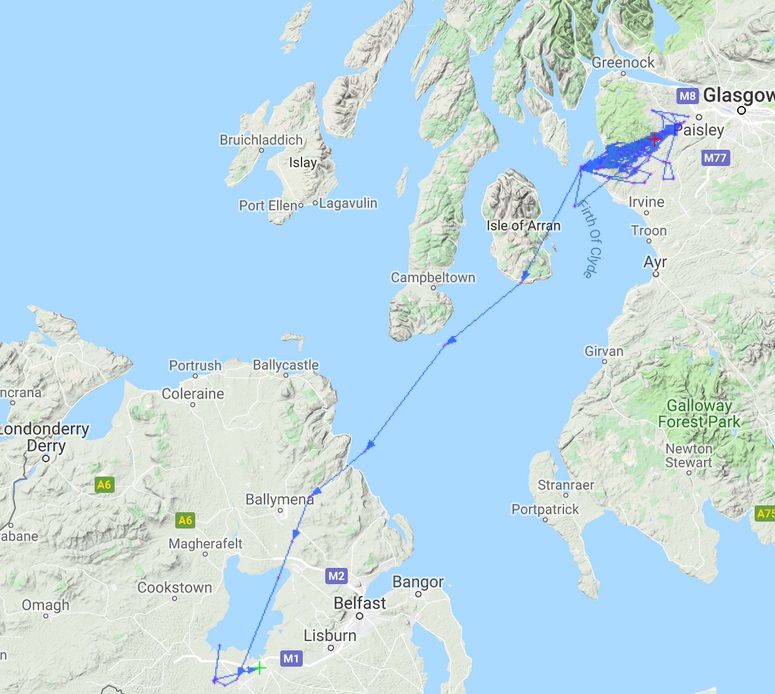 Map updated 13/08/19  Rufus has spent the last couple of weeks in the area of Northern Ireland that he arrived in on 31st of July.  He is mainly foraging in agricultural areas and likes to spend time on the roof of a large industrial unit off Eastway in Lurgan. 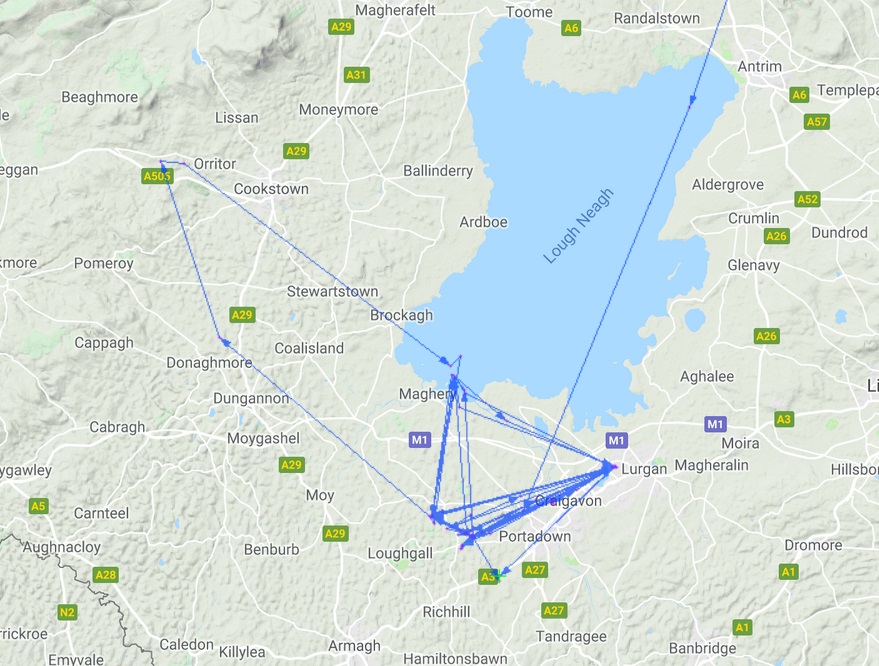 We have our first gull of the year in Portugal. Rufus has landed on Praia da Vagueira this morning at 0744 and who can blame him with this week of rain. He had arrived in Navan in Ireland on Monday afternoon (2nd) which is a popular spot with our gulls and stayed there for a couple of days before leaving just before 2000 on Wednesday (4th). He flew south and left the southern Irish coast at 2351. He was picked up just of Penzance at 0252 on Thursday (5th) and continued for the next 10 hours flying south over the Bay of Biscay. He hit northern Spain at O Freixo at 1323 but instead of resting he continued flying overland towards the east coast of Spain before turning south. He crossed into Portugal around 1800 and continued flying south throughout the night until his arrival this morning. That’s a non-stop flight of 35 hours!! Will he stay or will he go?

We can now reveal that 14W:C will now be know as Rufus. This name was picked by the pupils at Kilchattan Primary School on the Isle of Colonsay who were offered the opportunity to name one of the 2019 gulls after a school visit in May. Since our last update Rufus has been busy continuing his migration. After arriving in Portugal on the morning of the 6th he continued heading south to the Setubal Municipality, a favourite area for our gulls. He stayed here until 2011 on the 6th before heading to a beach further south for a rest. By 1029 on the 7th he was flying south again and flew overland until reaching the south coast of Alvor at 1438. He has another break before flying to Cavacos and arrives at 2050. Over the course of the 8th he spends time resting at Praia da Barrinha and hanging out on the coast before starting to fly south then east until arriving off the coast of Cadiz at 0904 on the 9th. After spending four hours here he is off again and arrives in Morocco near Asilah at 1325. He headed down to an area south of Larache where he has been for the last five days.
Rufus is the first of our tagged gulls to be tracked to Morocco this year and it still amazes us that the gulls travel this far. We have no idea, when we catch them, what they are going to do and we have no basis for which gulls we caught apart from if they ventured too close to the catching team. Could he head further south like Clyde from 2017?

Would you like to adopt Rufus and see your name here?  Then found out how you can adopt him here