Roland is an adult male Lesser Black-backed Gull.  He was hand caught at Castle Semple Loch on the 28th of June.
As he was hand caught we don’t have any evidence of nesting behaviour but it is believed, by the movement data below,

that he may have a nest on Little Cumbrae.  At the time of tagging he weighed 890g and has a wing length of 42.2cm.  Roland can be identified in the field by his colour ring 11S:C.

Map updated 08/01/18 Roland is still sunning himself in the same area of Portugal.

Map updated 18/01/18 Roland is still enjoying the sun in Portugal, a far cry from all the snow that we have seen in Lochwinnoch this week which would have made foraging very difficult for our gulls as it does for many other birds.

Map updated 01/03/18 We may be hit with the whitestuff today but that hasn’t stopped one of our gulls from starting his return journey.  He’ll be in for a surprise though if he hotfoots it back as this snow has to be about for a few days more. Roland spent the winter period down at Aveiro in Portugal.  We unfortunately lost contact with him on the 10th of Jan but when he came back online on the 24th of Feb he was still in this region.  Over the last couple of days since he has headed north up the coast past Porto and is currently hanging out in Matosinhos.  So far he is following his outward route and we look forward to seeing if he continues to do so or if, like Gary, it’s just a little movement for now. 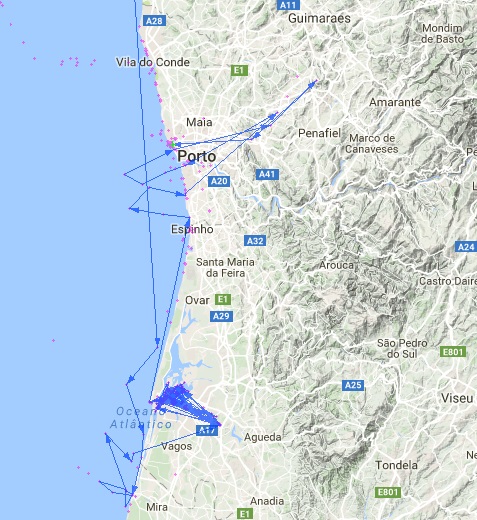 Map updated 28/03/18 Roland has been hanging about Matosinhos and is hopefully getting ready to head north. 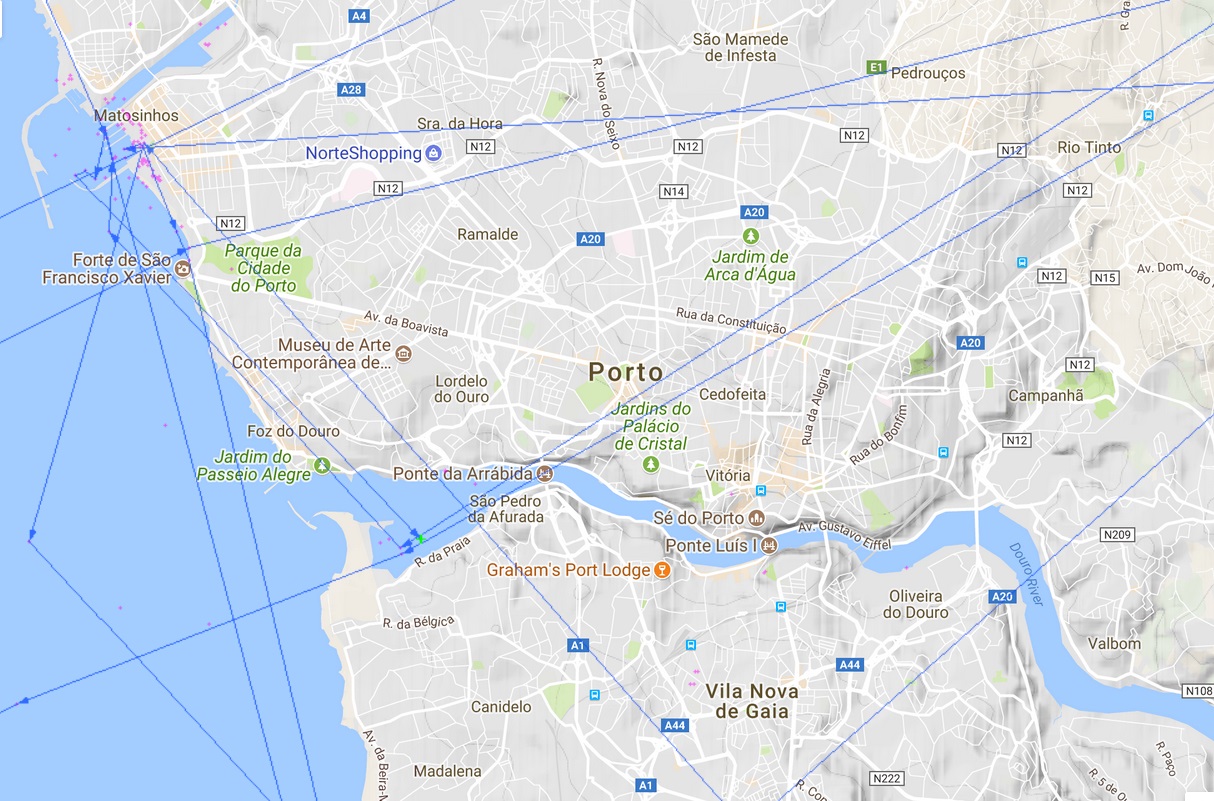 Update on 03/04/18 We have received another photograph of one of our gulls overseas. This time it’s Roland. He was spotted on the beach at Sta Cristina, Oleiros La Coruña in Spain on Sunday the 1st of April. His spotter was Antonio Lopez Porto who took the photo below. Again it’s hard to see the tag which is great news for us as it shows it isn’t causing any issues. However we haven’t heard from his tag since the 28th when he was near Matosinhos so we are keeping our fingers crossed that we will start to get more readings as the daylight increases. What is interesting about this sighting is this is the same area that Roland was spotted back on the 19th of November when he was heading south. It’s great to know there are avid spotters in the area keeping an eye out for ringed gulls as well as us being able to build a picture of our gulls favourite places. 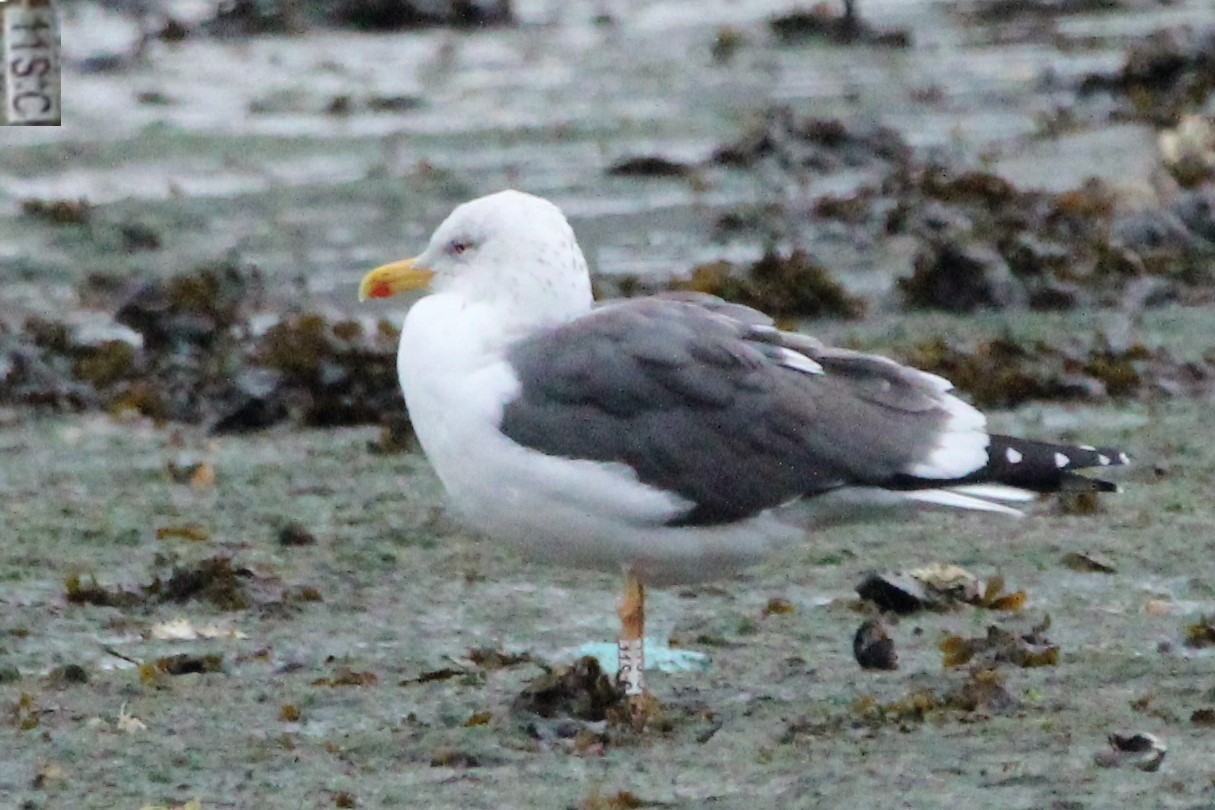 Map updated 02/05/18 Roland is back!! We received a welcomed update from our tracking system this morning showing that Roland had made it back to Lochwinnoch. When we last heard from his tag at the end of March he was in Portugal and heading north. Unfortunately his tag lost its charge and we heard nothing more until he was photographed in Northern Spain in April. We suspected that he may have returned home and kept an eye out for him at the loch. Then today his tag finally charged up and revealed he was indeed at Castle Semple at 0400. Because his tag lost its charge we don’t know the details from his journey north but for now we are happy that a fourth member of Team Gull has made it home.

Map updated 31/05/18 Roland’s tag has been sending out intermittent signals over the last few weeks but his recent update shows that he has set up his nest site on Little Cumbrae and has regularly been foraging around Lochwinnoch and has even headed up to Loch Lomondside.

Map updated 13/06/18 Roland, like many of the other Little Cumbrae gulls travels between his nesting site and Lochwinnoch on an almost daily basis.  Again keep you eye out for him.

Map updated 05/07/18 Roland is back and forth everyday between Castle Semple and Little Cum,brae and we spot him or him us most days.

Map updated 20/07/18 Roland has started spending time on the roof of the TnT builiding in Linwood.  This roof was used by alot of our gulls last year before they headed off on their migration.  Will Roland be next?

Map updated 01/08/18 Roland’s tag is working intermittely again so we are not sure what he has been up to in the last few weeks.   Hopefully when it gets a full charge we will be able to update you.

Map updated 06/11/18 Roland’s tag has came back online and we can see he has made it to Portugal!  Because the tag is working intermittely we don’t have the details of his journey but it’s great to see he has made it overseas for a second tagged year.  He is back on his wintering grounds near Averio.  Hopefully he will be spotted and identified by his colour ring by one of the many birdwatchers in the area.


Would you like to adopt Roland and see your name here?  Then found out how you can adopt him here