Roger is an adult male Lesser Black-backed Gull.  He was hand caught at Castle Semple Loch on the 15th of June.
As he was hand caught we don’t have any evidence of nesting behaviour but it is believed, by the movement data below, that he may have a nest on Little Cumbrae.  At the time of tagging he weighed 907.5g and has a wing length of 43.5cm.  Roger can be identified in the field by his colour ring 12R:C.

Map updated 08/01/18 Roger is still hanging out in the same area in Portugal.

Map updated 18/01/18 No change with Roger.  He is still following the same pattern of foraging in Portugal

Map updated 30/01/18 Roger has remained in the Setubal Municipality area.

Map updated 07/02/18 No new news for Roger. He is doing well avoiding the cold weather that we are experiencing at the moment and doesn’t look in a hurry to return. Who can blame him!

Map updated 15/02/18 Roger is spending alot of time hanging out down at the docks in Sesimbra.  The previous maps may look like he is remaining in the same place but don’t worry he is moving about. There are plenty of foraging oppurtunities for him in this area and he should be putting weight back on before he heads back to Scotland.

Map updated 23/02/18 Roger has moved from the port at Sesimbra in the last week and is now hanging out at the ports at Santa Catarina.

Map updated 01/03/18 Roger has been busy going back and forth along the coast and hanging out in different ports.  At the moment he is near Cachofarra.  Storm Emma is hitting that region today so we wonder if he’ll hunker down and weather it out. 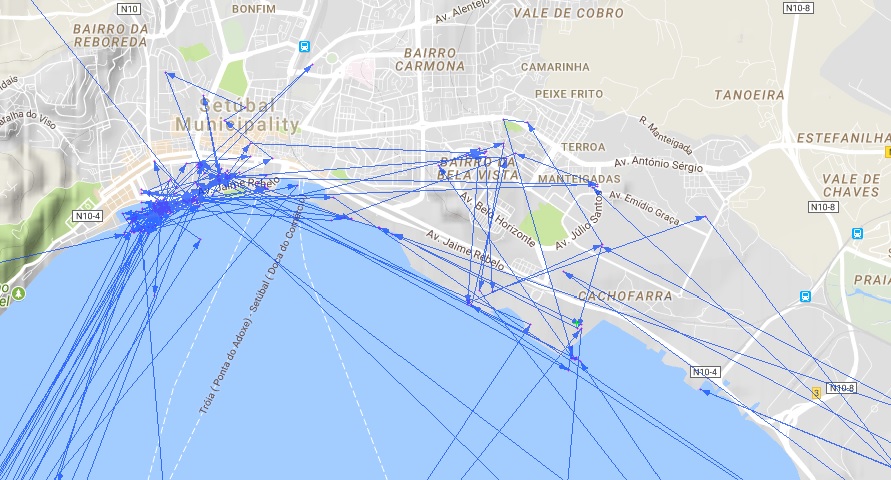 Map updated 09/03/18 Roger has moved away from the ports that he has been frequenting all winter and is currently foraging on farm land at Alcácer do Sal. Archie is doing something similar at the moment in France.  Does this change in foraging signal the birds are getting ready to come home?

Map updated 23/03/18 Roger has came back online and we can see that he has moved further to the south east and is hanging out near Torrão.  Hopefully we will keep getting updates now that the hours of sunlight are increasing allowing the tags to charge.

Map updated 10/05/18 Sadly we have learnt here at Tag-n-Track that we have lost a second member of Team Gull. Roger has been found dead in Portugal. We last heard from his tag since the 24th of March. However, this didn’t bother us too much as other birds in the region weren’t sending us info from their tags. Then last week we received a ringing recovery report from the British Trust for Ornithology which informed us that Roger had been found dead and identified by his colour rings.  He was found in Torrao in the Setúbal region of Portugal.  This was where his tag last sent a signal.  Unfortunately we don’t know how he died but when he was last sighted in January he had a badly swollen foot.  Gulls often get sore feet due to the environment they hang about in but they usually recover from this. Although this is a sad loss for the project Roger, like Gully MacGullface, has contributed massively to the understanding of gull movements and helped to spread the word that gulls aren’t as bad as everyone makes them out.  On a plus note as well, with the help of the BTO, we have managed to track down his tag and should receive it in the next few days and may be able to redeploy it.


Would you like to adopt Roger and see your name here?  Then found out how you can adopt him here