Ollie is an young adult male Lesser Black-backed Gull.   He caught in one of our nest traps on the Isle of Pladda off the south coast of Arran on the 7th of June. We were surprised to find him in the trap and on a nest with eggs as he is approximately 3 years old and shouldn’t be breeding yet.  However, it looks like he might have been a bit nosey and the nest doesn’t belong to him as he hasn’t returned to Pladda since tagging


Map updated 01/04/19  Ollie’s tag is currently downloading which lets us know he is back in range and probably in Spain.  We haven’t heard from him in a few months but so far we can see he has spent until the end of January in Casablanca in Morocco.  We will update you more once his tag has finished downloading all it’s data. 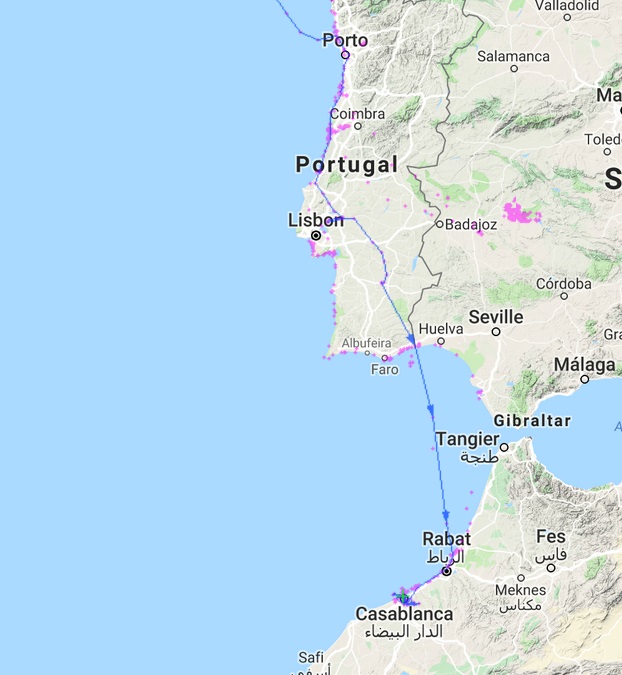 Map updated 02/14/19 And the download is complete.  Ollie spent the winter in Casablanca before leaving in the early hours of Monday morning (1st). He has travelled along the coast for 11 hours before arriving at a large lake at 1302 and remained there before leaving at 1820 and headed back to the coast before flying north. He arrived in Spain at 0747 this morning and Ollie is currently in Cádiz as off 0956. 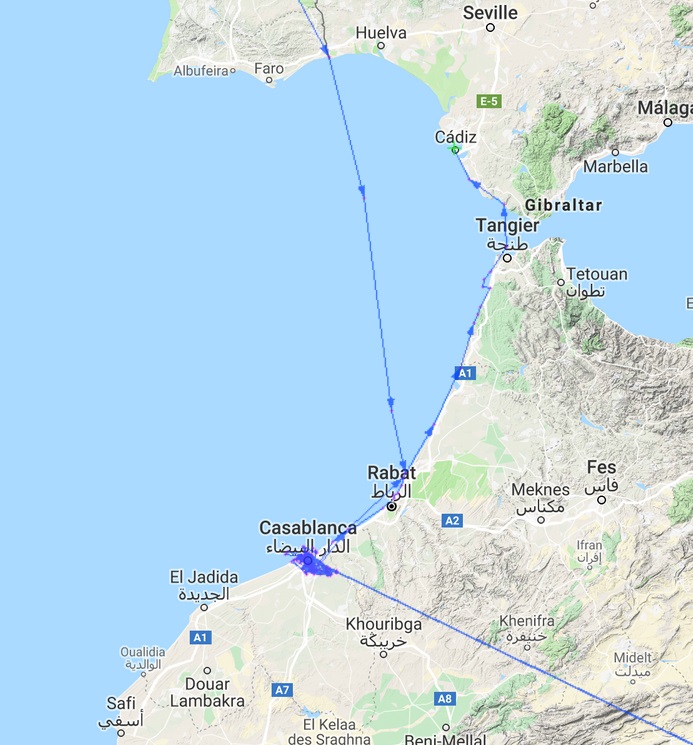 Map updated 08/04/19 Ollie continued along the Spanish coast to Huelva before heading to Isla Cristina where he has spent the last few days. His foraging pattern suggests he is following the fishing boats that come into the fishmarket there. It’ll be interesting to see how long he stays as he is four years old this year and is now a full adult and has the potential to find a mate and breed. 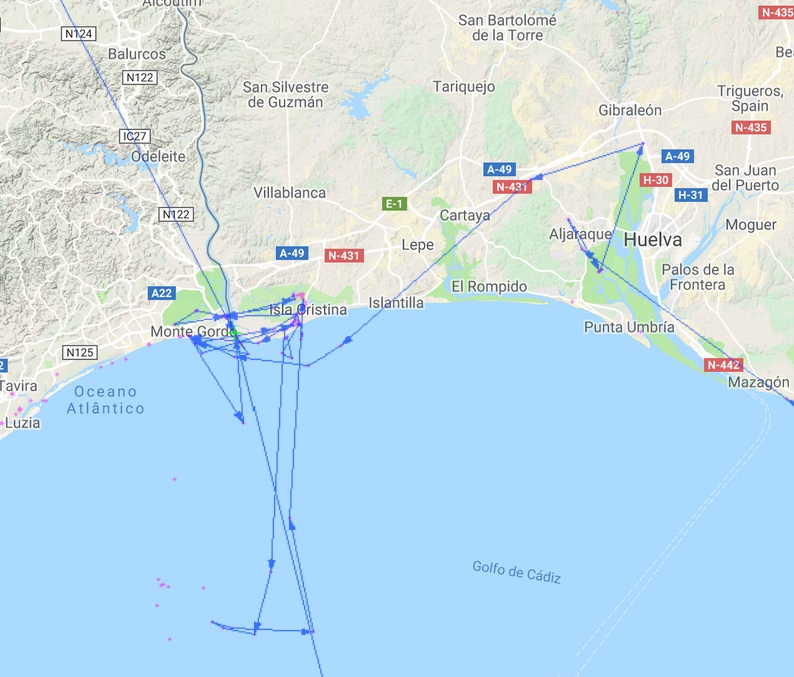 Map updated 18/04/19 Ollie has now decided it’s time to head back. He is four this year just like José and hopefully is coming home to find a mate. Ollie arrived in Spain on the 2nd of April after spending the winter in Morocco and has spent the last few weeks at Isla Cristina’s fish market. Yesterday at lunchtime he had decided that he’d had his fill of fish and was off on the next stage of his trip. He was picked up flying north west in Portugal at 1318 and continued in this direction reaching the coast at 1825 near Melides. He then headed up to the Setúbal Muncipality where he arrived at 2057 and has spent the night and most of this morning. He headed west towards the coast again but then turned back around and was last picked up in Sesimbra at 1354. This was the wintering ground for one of our lost team gull members Roger. It’s funny to think how spread out are gulls can be but they all hone in to certain areas. 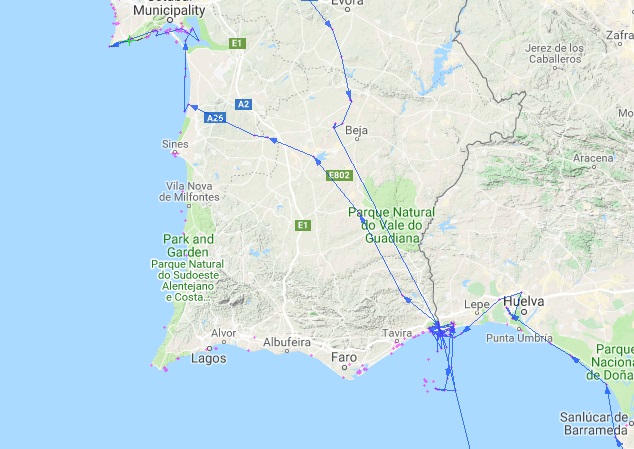 Map updated 22/04/19  Well it seems we were wrong about Ollie heading home to Pladda.  After spending three hours in Sesimbra he started heading south following the coast at 1702.  He flew past Sines and near Aljezier before reaching the southern coast of Portugal at 2308.  He continued east through the night and by 0211 on the 20th he was back in Isla Cristina where he has spent the last few days back at the fish market. 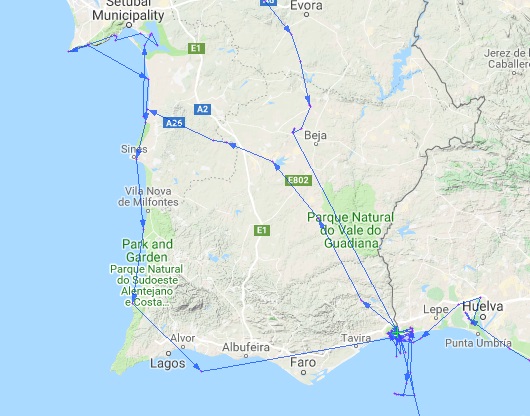 Map updated 28/04/19 Ollie is off again. He left the estuary between the border of Spain and Portugal yesterday (27th) at 1210 and flew for four hours before hitting the coast at Sines in Spain. He then followed the coast for an hour before heading north west towards the Setúbal Municipality. He arrived here at 1926 and was still here in the early hours of this morning. He was here a couple of weeks ago for a few hours before returning to Isla Cristina, will he do the same this time? Possibly not as his last update at 0633 this morning had him flying towards Lisbon. With Ollie though we never know what’s going to happen? 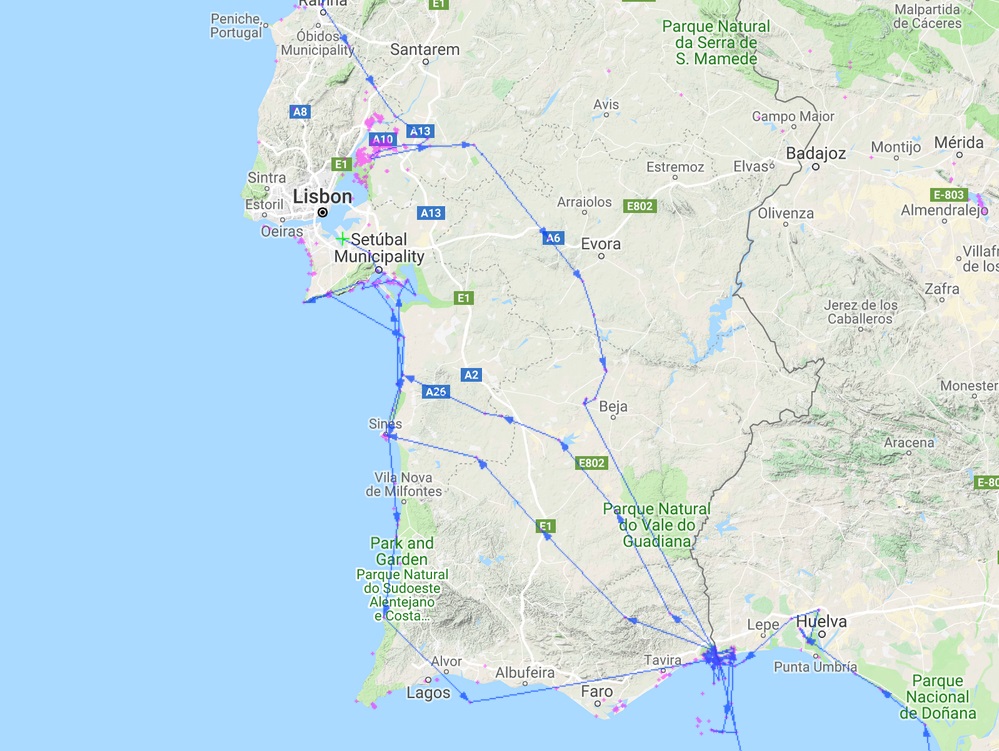 Map updated 01/05/19  Ollie has made to Figueira da Foz in Portugal and isn’t very far from where Kingpin is hanging out.  It looks like he won’t be returning to Isla Cristina on this journey. 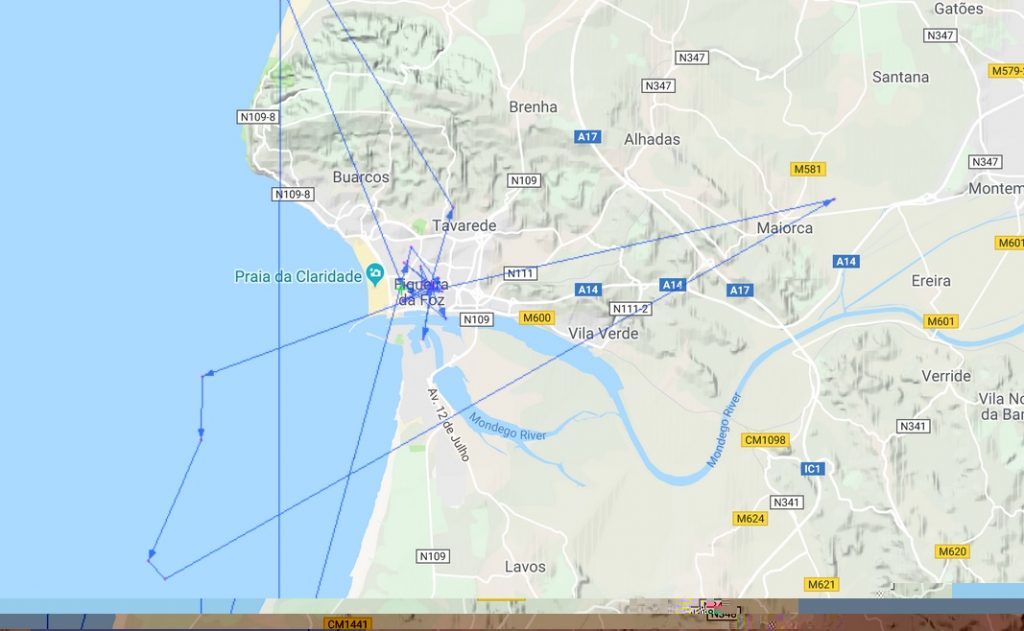 Map updated 09/05/19 It’s been about a week since we updated you about Ollie. He arrived in Spain on the 3rd and travelled up to one of our gulls favourite haunts, A Coruña. He remained here until the morning of the 6th where at 1112 he was picked up north at Ferrol. He has spent the last couple of days hopscotching along the Spanish coast visiting Burrela for four hours on the 6th, Punta La Centrolleria for two hours on the morning of the 7th and the roof of a furniture store at Navia at 1458 on the 7th (maybe he was looking for some soft furnishings for his nest?).
He has spent a lot of time at sea over the last few days as well as you can see from his map. He was last picked up in Spain at 0752 this morning at Toñanes and has spent seven hours crossing the Bay of Biscay. He was last picked up at 1508 near Royan and will have hopefully now made landfall in France. Keep going Ollie! 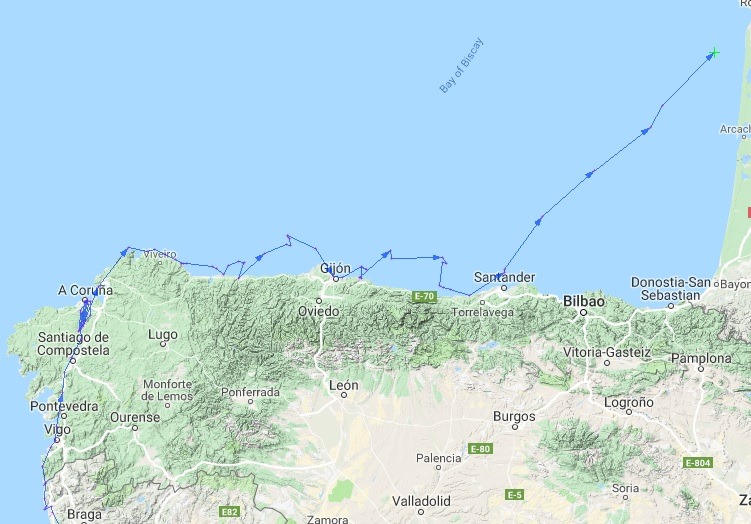 Map updated 13/05/19 After arriving in France on the 9th, Ollie continued up the coast passing Royan and in the early hours of the 10th, Île de Oléron and Île de Ré. He headed up to the region around Olonne-sur-mer where he has spent the last couple of days. He remained there until 1500 yesterday afternoon before heading north west up to the River Loire at Saint Nazaire where he was picked up just before 0300 this morning. He seems to be taking in all the sites so far. We wish we could be there! 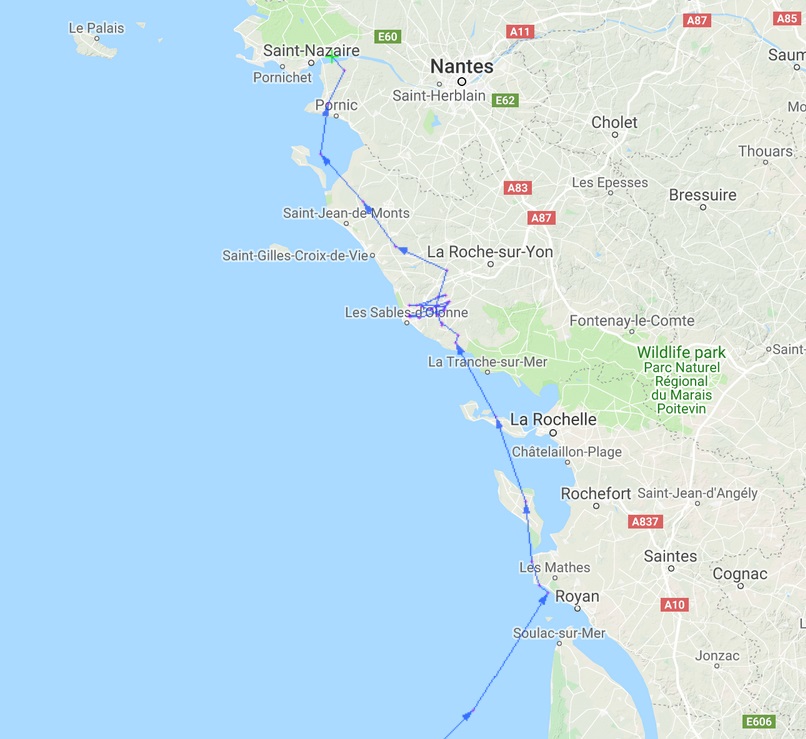 Map updated 15/05/19 Ollie has arrived back in the UK this morning. He travelled up to the north of Brittany where he hung about for most of yesterday. He was still near Begard before midnight last night but by 0239 today he was starting to cross the channel. He arrived in Devon just after 0600 and has carried on north to near Kilkhampton when he was last picked up at 0845 today. 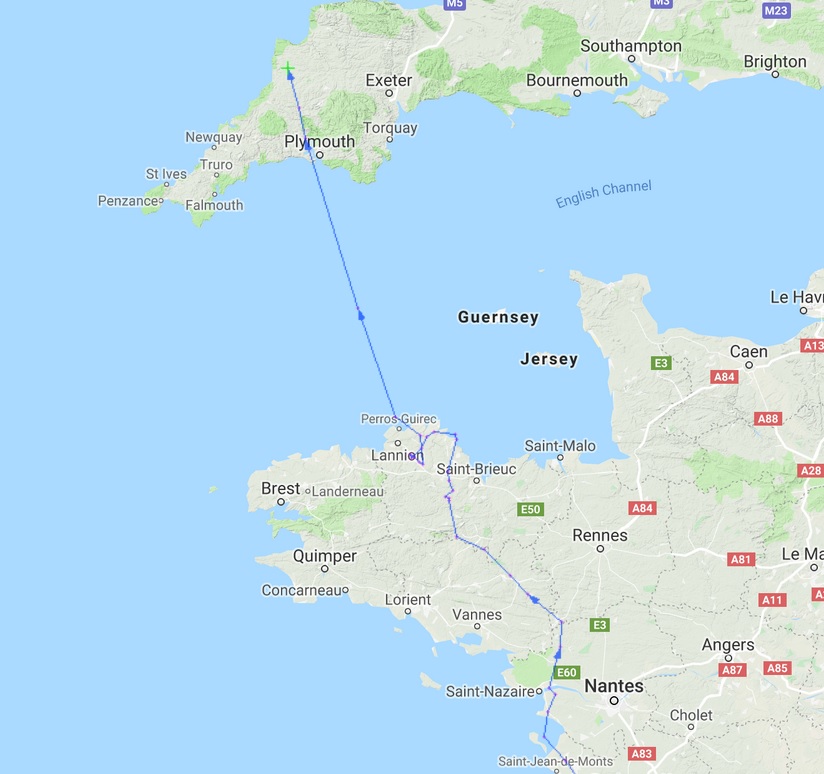 Map updated 16/05/19 Ollie has made it to Wales. He carried on flying yesterday morning through Devon and crossed the Bristol Channel passing Lundy. He was over Pembroke by midday and carried on up to Ynys Dinas where he stayed until the early hours of this morning. He was off again come dawn following the coast and was last picked up in Aberyswyth just before 1400. 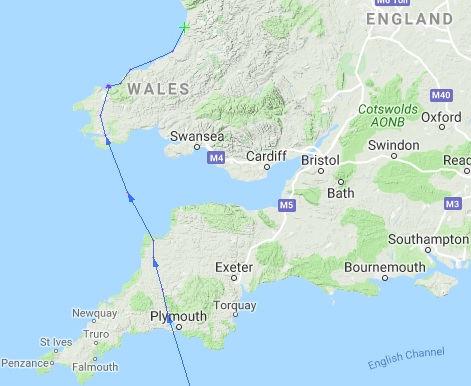 Map updated 20/05/19 Ollie has continued up the Welsh coast with a stopover on Anglesey. He then kept on flying north and reached the Isle of Man yesterday at 1350 and spent the afternoon and evening there.  He was still on the Isle of Man at 0607 this morning but looks to be getting ready to continue his journey north. 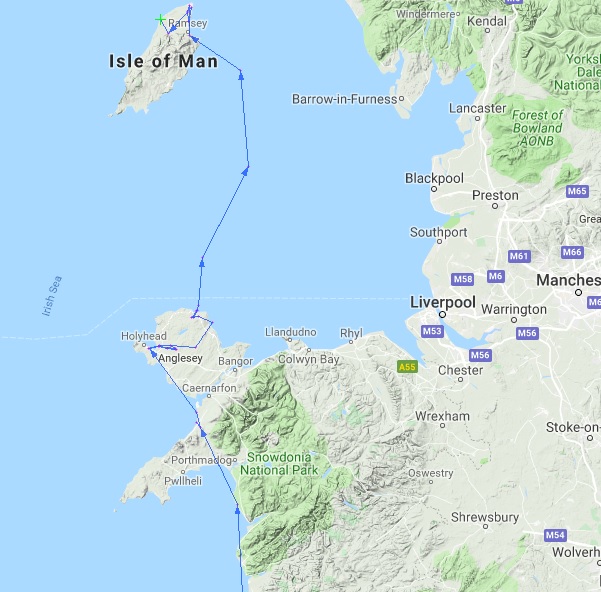 Map updated 22/05/19 Ollie has made it to Scotland.  It took him just over two hours to fly from the Isle of Man and he arrived just before 0900 on the 20th.  He exploring Dumfries and Galloway at the moment after spending a day around the River Cree.  Is he heading to Dumfries? We will let you know asap. 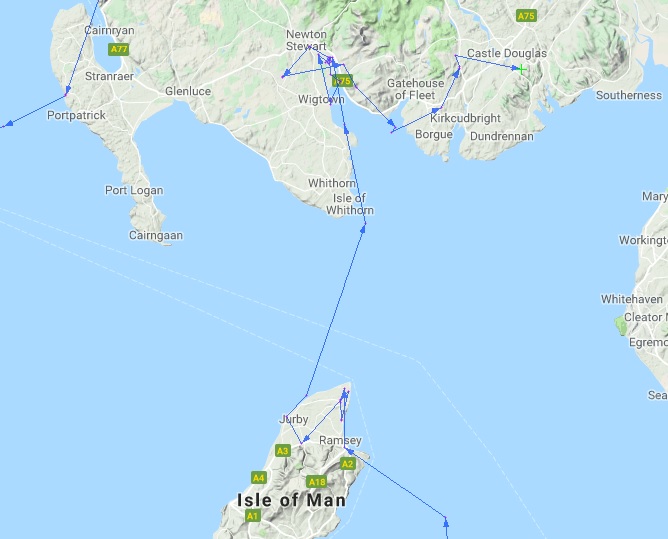 Map updated 24/05/19 Ollie has headed over Dumfries and is hanging about in the small agricultural townships like Courance and Nethermill. 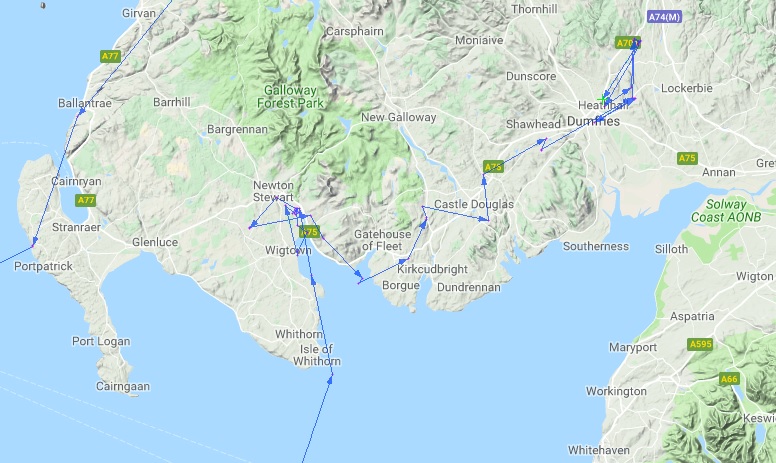 Map updated 01/06/19  Ollie has spent the last nine days in Dunfries and Galloway but has now decided to head north.  He hasn’t headed west though.  Instead he has headed east and is currently not far from Bathgate. We haven’t had one of our gulls in this area before so look forward to seeing what he does next. 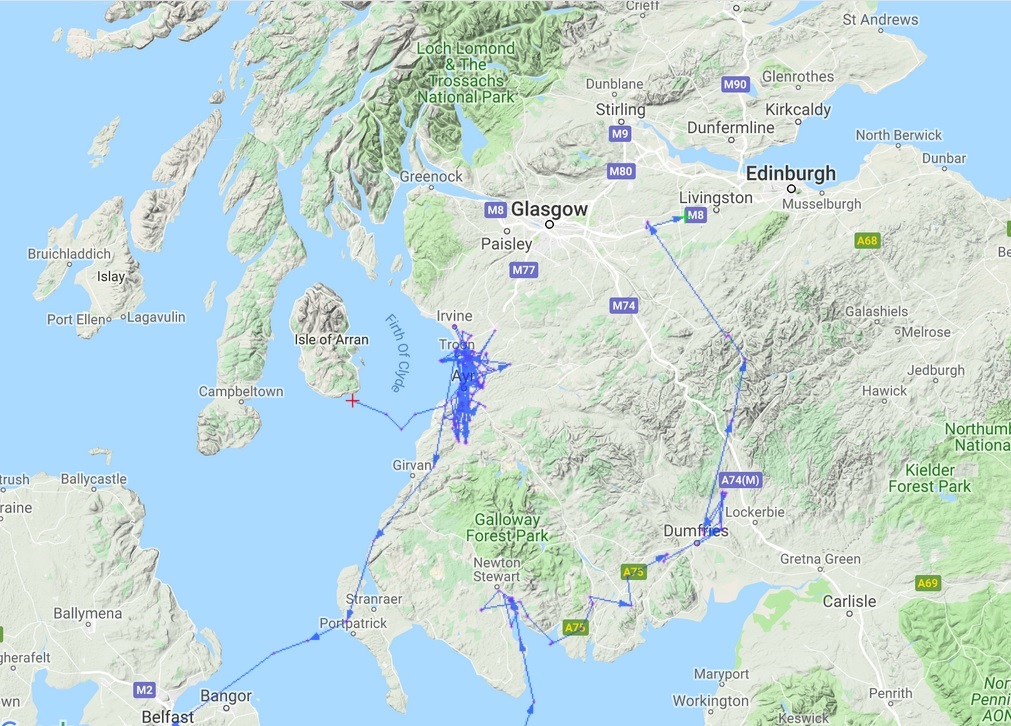 Map updated 02/06/19  Ollie’s movements over the last day show that he is busy foraging for food.  He is currently north of Bathgate so is he for the off again? 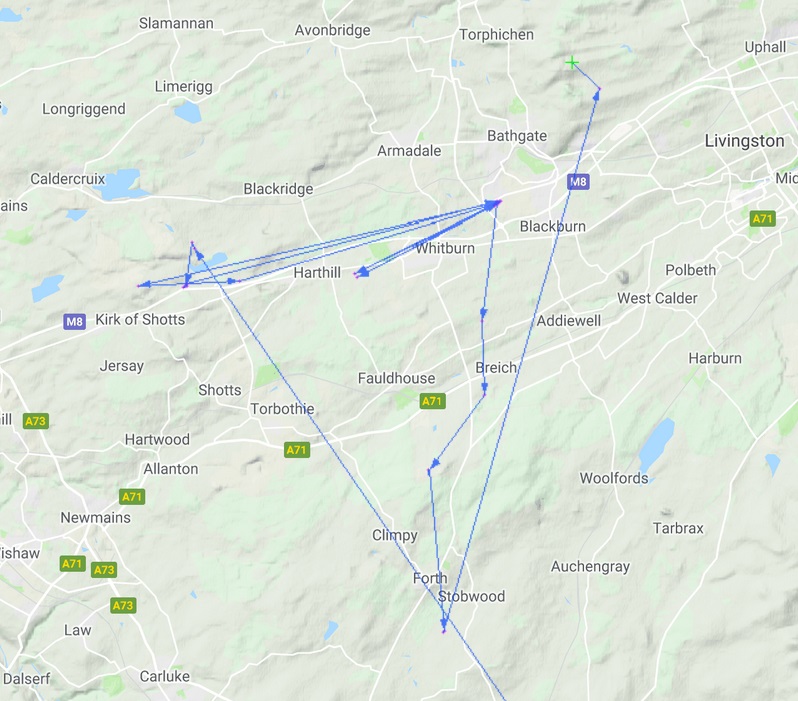 Map updated 12/06/19  Ollie has been busy over the last 11 days exploring a wide area from Wishaw, Shotts and Whitburn.  Remember he has yet to find a mate and this exploring behaviour may help him to do so. 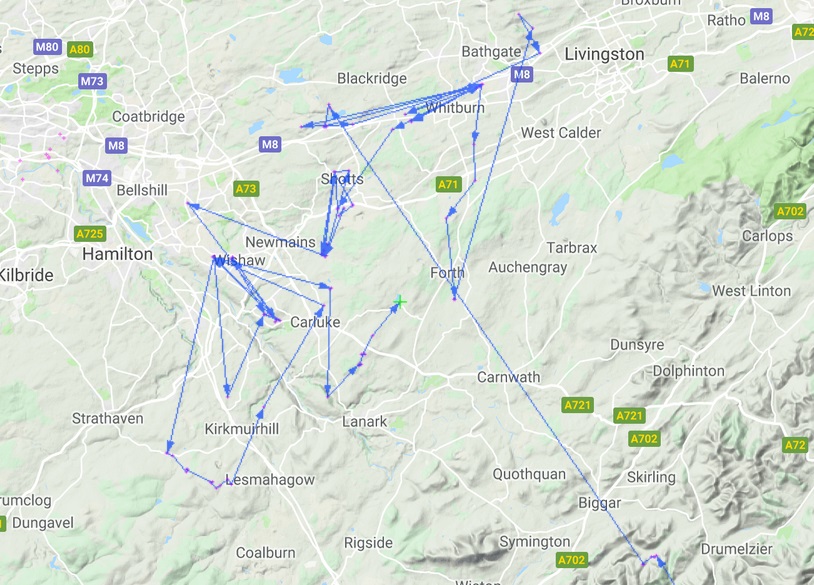 Map updated 22/06/19  Ollie is still over in the east moving between Lothian and South Lanarkshire. 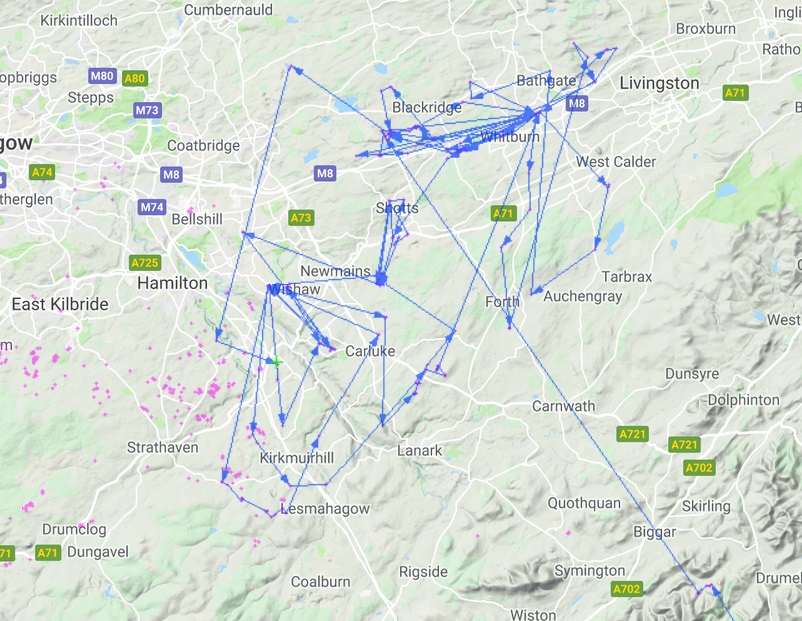 Map updated 28/06/19 Ollie has returned to the west coast and has been back to Pladda where we caught him last year.  Will he head back to Troon for the remainder of the summer? 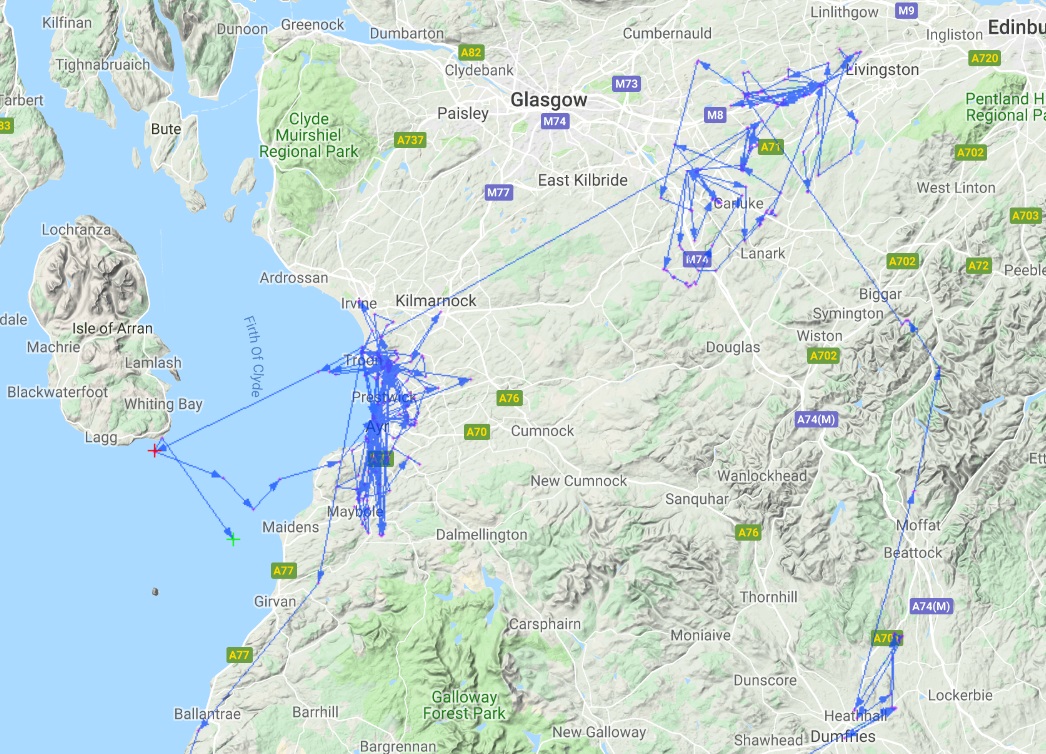 Map updated 25/07/19  Ollie has spent the last month back on the Ayrshire coast. 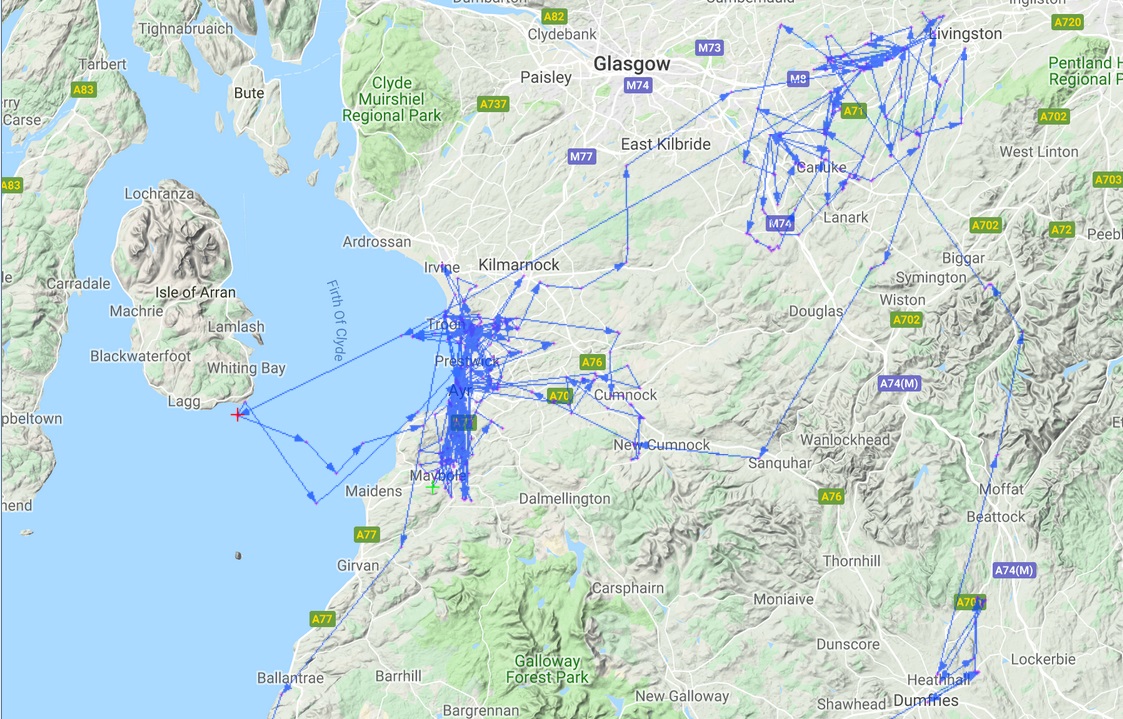 Map updated 12/08/19  We haven’t heard from Ollie’s tag for the last couple of weeks until today when we recieved a data dump and can see he has made it over to Northern Ireland and is currently near Loughgilly.  There are a few days missing from the data but what we have been able to establish that Ollie has been in Maybole for the last few weeks until the 5th of August.  After lunch on that day he started to head south and left Scotland near Portpatrick at 1505 and was then picked up a few hours later flying towards Northern Ireland.  Hopefully his tag will now start to work regularly again and we can see where he goes to next. 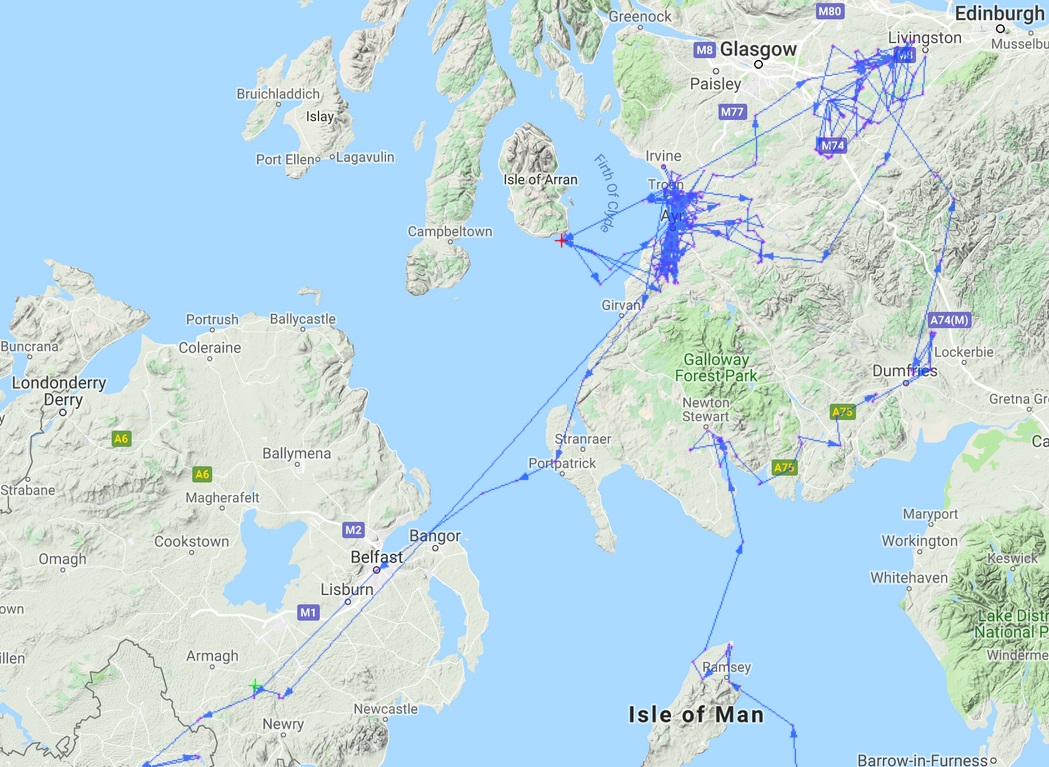 
Would you like to adopt Ollie and see your name here?  Then found out how you can adopt him here