Luna is an adult female Lesser Black-backed Gull.   She was caught at her nest site on the roof of Greenock Police Station on the 22nd of May. She built her nest in the same spot PC Bobby had his nest last year so it’s possible she may be his mate. 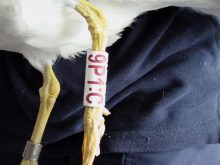 Map updated 31/05/18 Luna is very active and has been foraging far and wide since we tagged her. The furthest she has travelled was north east to Loch Lomondside.

Map updated 13/06/18 Luna’s chicks have started to hatch and there was one fresh little one when we checked on Monday.  We can see thatshe forages mainly near the primary school as well as heading out into the Clyde.

Map updated 20/06/18 Luna is a busy mum, often out looking for food for her chick.  Again, like the other gulls on the roof, it looks like she only has one chick left after Storm Hector but the chick is nice and healthy.

Map updated 05/07/18 Unfortunately it looks like Luna has lost her chick.  The hot weather has proven to be an issue at a few places where we normally find gull chicks and the police station roof is one of them.  She is still spending alot of time around All Saint’s Primary and has made a wee foraging trip down to Skelmorlie.

Map updated 11/07/18 Luna is acting very much like PC Bobby did last year and spending alot of foraging time around about one of the Primary schools where we known a couple of local residents like to feed the gulls.

Map updated 01/08/17 Luna forages very much like PC Bobby last year.  Heading from the police station up to the vicinity of the All Saint’s Primary where some of the local residents feed the gulls and other birds.  We hoped she might nest again but this year has been really bad for chicks and her breeding season is definitly over.

Map updated 10/08/18 No change from Luna. She certainly knows when she is on to a good thing.

Map updated 16/08/18 No change with Luna.  She has been seen at the station so we know all is well with her.

Map updated 31/08/18 Luna is still hanging about in Greenock.  Not much is changing with alot of our gulls at the moment.  We might need to wait for a big change in the weather.

Map updated 04/09/18 Our female gull, Luna, has left on her migration. She left Greenock on the 3rd of September in the early hours of the morning and arrived at the coast of northern Spain this morning (4th). Her total journey time was just shy of 24 hours. Very impressive and as you can see she has travelled in almost a straight line. See you next year Luna!

Map updated 05/09/18 Luna has continued on her migration south following the west coast of Spain into Portugal.  She was picked up this evening near Figueira da Foz.  Will she continue further south down to the Costa da Caprica which seems to be a favourite haunt of many of our birds?

Update 20/09/18 It seems Luna’s tag transmission has stopped.  Don’t worry though, we believe it has just gone out of range for the data to be collected.  This has happened with a few of our gulls this year in certain areas of Portugal.  The tags will continue to collect data and once she is back in range in the Spring we will be able to let you know how she got on.

Would you like to adopt Luna  and see your name here?  Then found out how you can adopt her here