José is an young adult male Lesser Black-backed Gull.   He was hand caught at Castle Semple Loch in Lochwinnoch on the 31st of May. José is still showing a few signs of not being a fully mature adult so is likely not to be breeding this year.  However, it looks like he returns to Little Cumbrae to roost.


Over the first few days of tagging we can see José likes to come to Lochwinnoch to feed and he has indeed been spotted by the Tag-n-Track team. 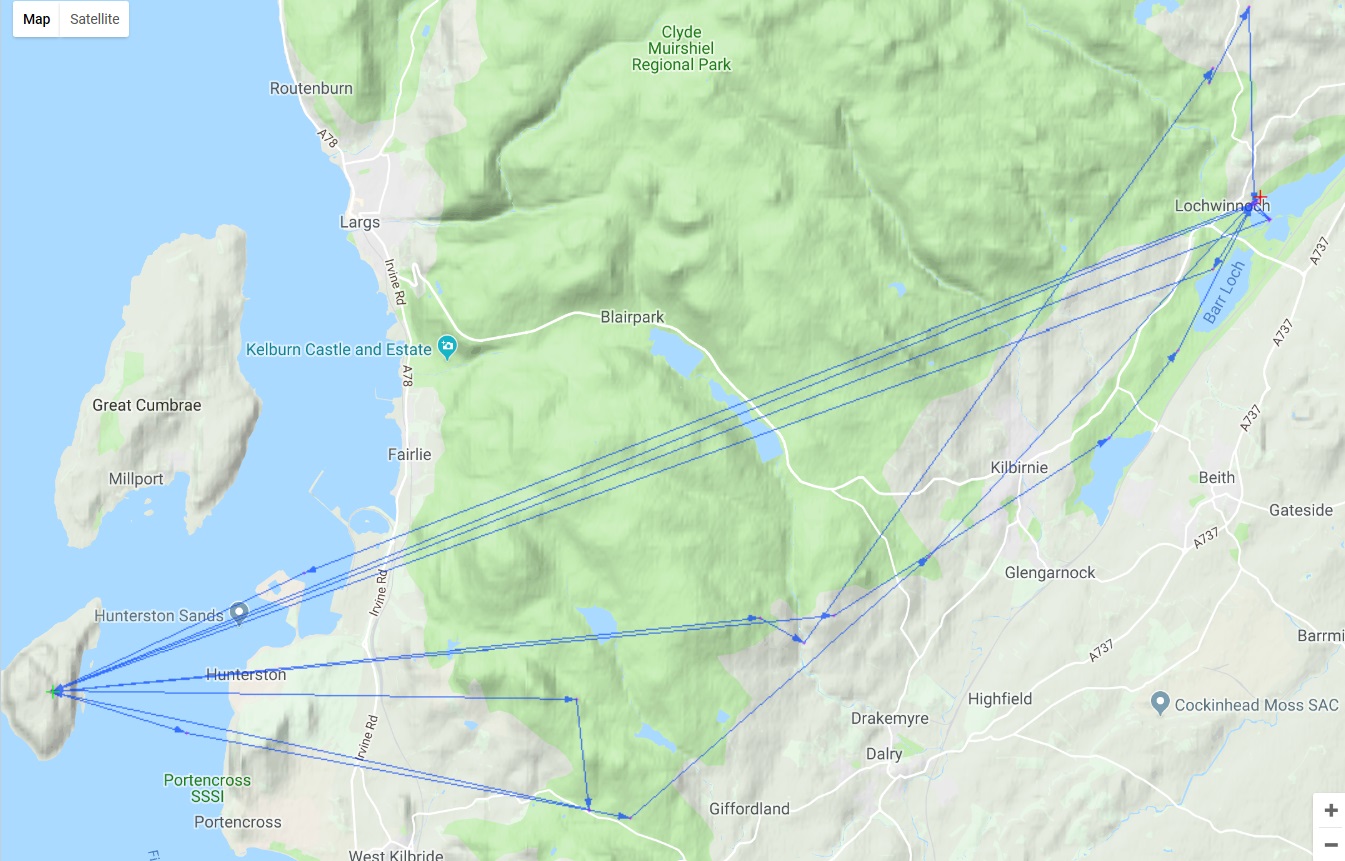 Map updated 13/06/18 Like many of our gulls that we tagged last year José regularly travels between Little Cumbrae and Lochwinnoch.  He has been spotted a few times so keep an eye out for him by looking for his colour ring.

Map updated 20/06/18 José is still a regular at Castle Semple and certainly seems to choose coming here over anywhere else in the area although he has spent a fair bit of time near Miliken Park Train Station.

Map updated 05/07/18 Like many of our other gulls José has got a wee bit restless and made a couple of trips that don’t follow his regular foraging pattern.  On Sunday (1st of July) he travelled down into South Lanarkshire near Thankerton for a few hours foraging before heading back via King George V Park in Glasgow and Newton Mearns.  Since he has been back and forth to Castle Semple Loch.

Map updated 11/07/18 José is still busy going back and forth rearing his chicks on Little Cumbrae. He has been busy foraging around about the Miliken Park area and has been seen down at the Loch.

Map updated 16/07/18 And another gull is off. They are leaving thick and fast at the moment and José is the fourth to go to Ireland. He left on Thursday taken a slight detour through Arran and the Mull of Kintyre before arriving in Northern Ireland just after 1800. He has then continued into the Republic with a wee stop at one of our gulls favourite places Navan where he had a wee rest. In the early hours of yesterday morning he was off again skirting past Lough Liffey and heading all the way down to just north of Waterford where he was last located today at 1259. Where to next José?

Map updated 01/08/18 José has spent the last few weeks around the Owenabue River.  The towns around here are really built up and he has spent time foraging and resting in the towns.  He has also been out foraging in the fields to the west and today has headed north to the estuary near Laharn.

Map updated 10/08/18 José has had a busy week exploring the agricultural area around Cork and there are fields in the Liberty Hill area he particularly seems to like foraging in.

Map updated 16/08/18 José has been keeping a fairly regular routine in the Cork area and seems to be quite settled there for the time being.

Map updated 31/08/18 José has settled into a routine in the south of Ireland.  We notice alot of our gulls settle into a routine when they move places before the weather then causes them to head off south.

Map updated 10/09/18 No change for José.  He is still hanging out on the estuary at Carrgaline.  We will update you next when he is off.

Map updated 22/10/18 José has left Ireland and has headed south straight across to Spain. He left about 1200 on the 21st and landed on the Spanish coast at 0555 the following morning at A Carballa, a total flying time of roughly 18 hours.

Map updated 24/10/18 José has headed east into Spain for a couple of days of foraging.  He has been up at the coast at A Coruña and at a landfill site further south.

Map updated 28/10/18 José has continued on his migration south.  He travelled back to the coast and followed it down into Portugal.  He continued down the Portuguese coast until heading east at Aveiro.  He then headed south east back into Spain and is currently near Alberquerque.  He is the first of our gulls to be tracked to this region.  Where will he go next?

Map updated 01/11/18  José has continued east into Spain and has spent the last couple of days near Orellana la Vieja.  We have a sneaky suspicion he has now reached his wintering grounds.

Map updated 08/11/18 It looks like we were right and José has reached his wintering location.  He is spending time roosting on the roof of a recycling centre (where his green cross is in the map) and spending time on the water in the Embalse de Orellana y Sierra de Pela Nature reserve.

Map updated 21/11/18 You can see from the map below that José has really established a routine on his wintering ground.  The thicker the blue lines the more he favours these areas which are still the recycling plant and the lake.

Map updated 05/12/18 No change in José’s foraging pattern.  Our next update for him will be in the New Year.

Would you like to adopt José and see your name here?  Then found out how you can adopt him here