José is an young adult male Lesser Black-backed Gull.   He was hand caught at Castle Semple Loch in Lochwinnoch on the 31st of May. José is still showing a few signs of not being a fully mature adult so is likely not to be breeding this year.  However, it looks like he returns to Little Cumbrae to roost.


Map updated 06/01/19  Since our last update in December, José has started visiting the Embalse de la Serena Lake.  He is still roosting at the recycling area.  He will probably keep following this routine over the next month or so.

Map updated 24/01/19  No change for José.  He is keeping to the same foraging routine and is likely to continue doing so for the next month or so. 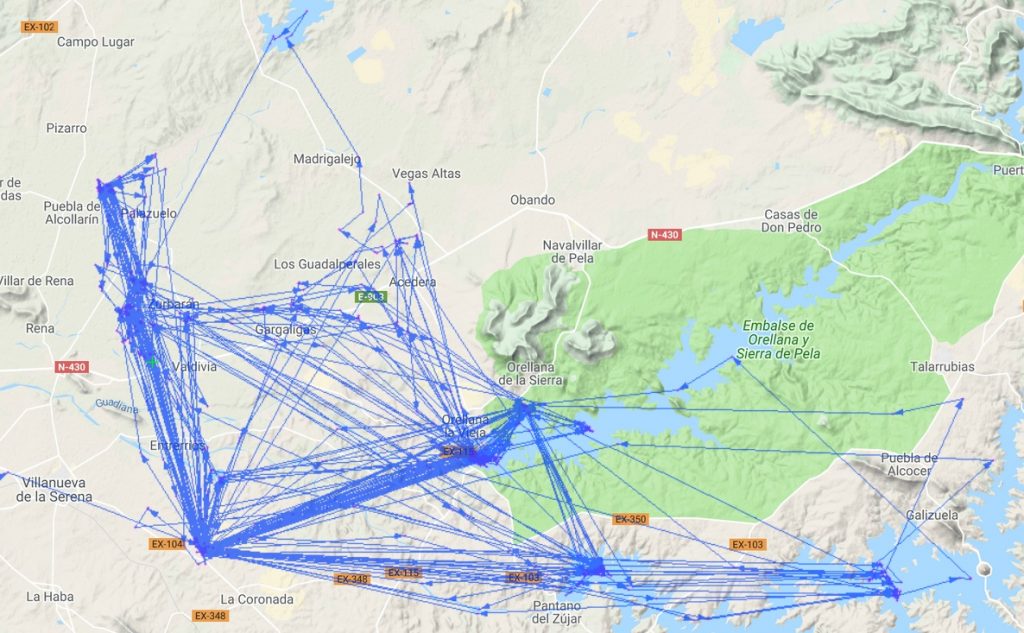 Map updated 21/02/19  As you can see there’s no change to José’s foraging routine at the moment. 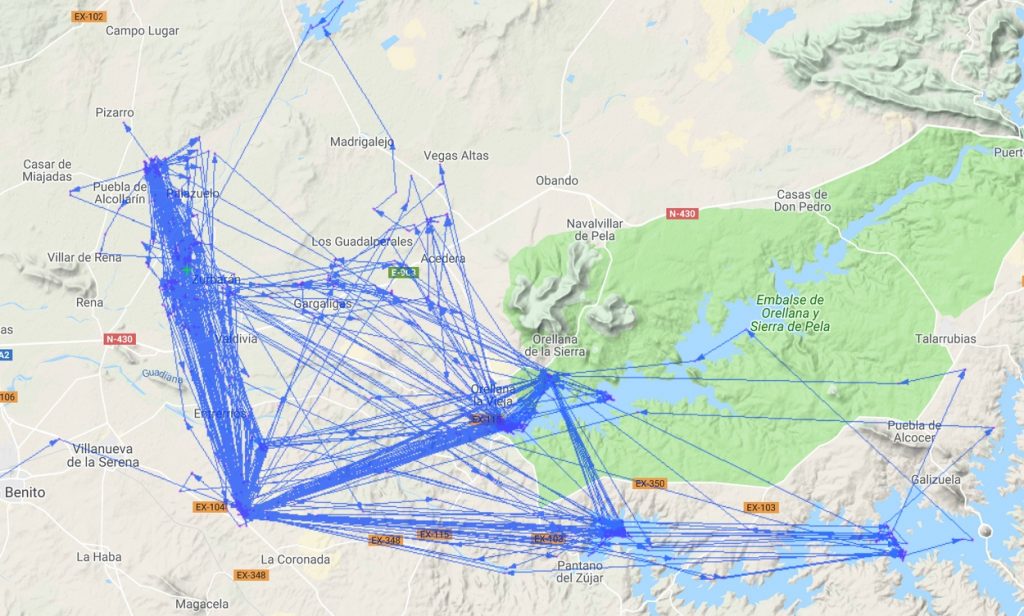 Map updated 13/03/19  José has left his regular haunts and headed back down to the lake at Alange.  Is this just a fleeting visit or is he starting to get itchy feet? 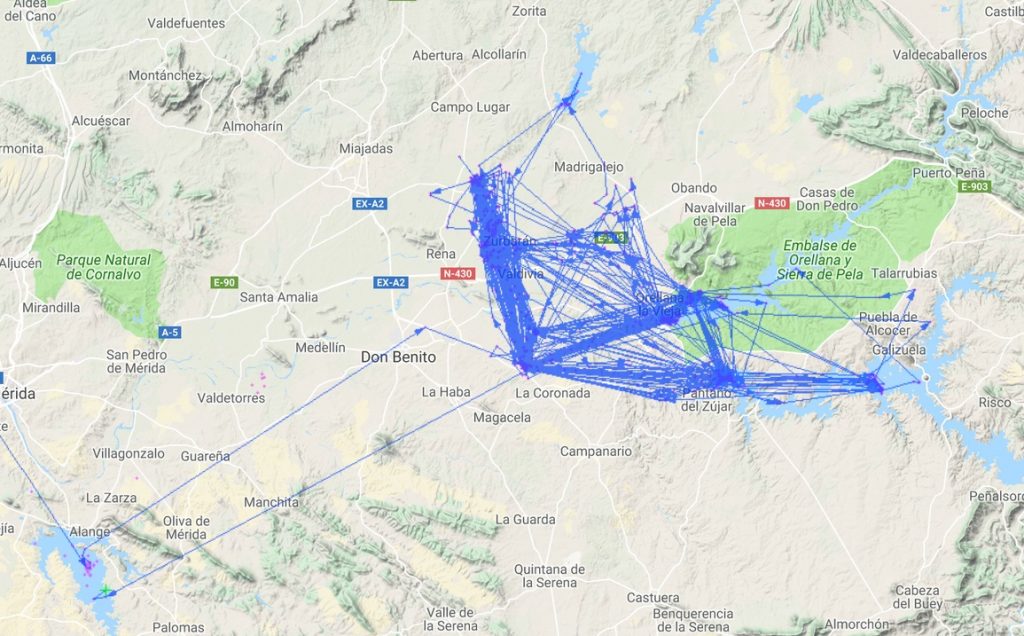 Map updated 18/03/19 And he is on his way back!  José left Spain on Saturday morning at 1105. By 1300 he was over the border in Portugal where he continued to fly north west until he hit the coast at Figueira da Foz at 1812.  He stopped for the night to refuel and rest before heading north up the coast at 0720 on Sunday the 17th.  He continued up to Aveiro where he was last picked up at 1326. We can’t wait to see where he is when the next update comes through. 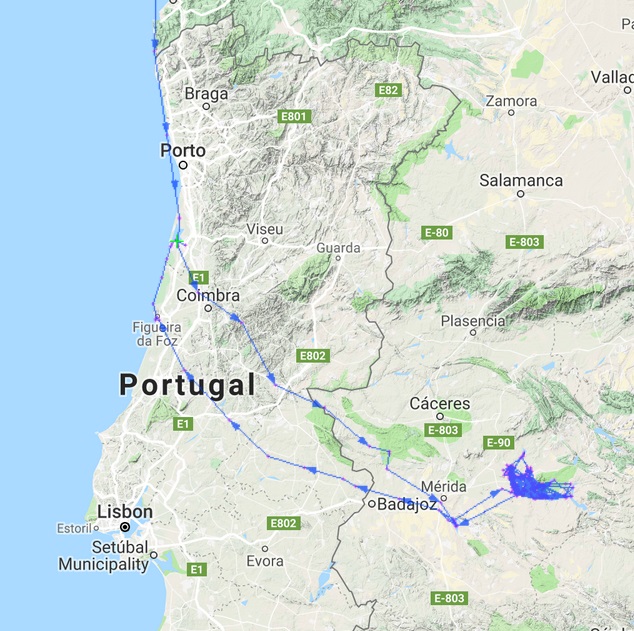 Map updated 15/04/19 José has spent almost a month now in the region around Figueira da Foz.  When we caught him last year we could tell by his plumage that he was three years old and with the time he has recently spent in Portugal we started to wonder if he would head back to Scotland for what is potentially his first breeding year. Lesser Black-backed Gulls obtain their full adult plumage at 4 years old.  Well finally he decided that it was time to go on Sunday morning (14th).  He was off by 1100 and flew north to Aveiro by 1300.  He continued north over Matosinhos all the way to Povoa de Vamin where he was picked up at 2028.  It looks like he continued flying north throught the night and he was picked up just over the Spanish/Portuguese border at 0737 on Monday morning (15th)  He then headed east back into Portugal and spent a few hours resting at a water treatment plant.  By 1346 he was back at the border and we look forward to see where he plans to go next. 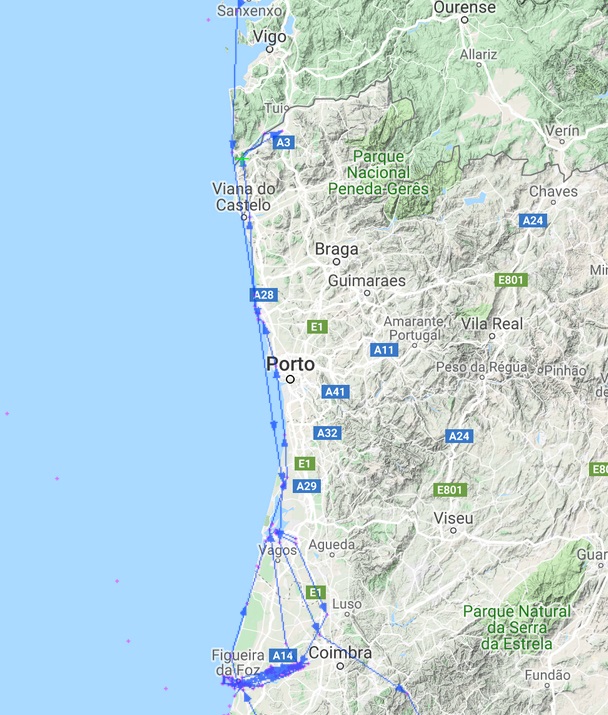 Map updated 18/04/19  José appears to be taken a wee break from his migration for the time being.  He carried on his flight on the 15th in the early evening where he flew to the Spanish coast and started heading north.  By 2100 he started heading north east and in the earky hours of the 16th he was flying near Soutoxueste.  At 0708 he was over Santiago de Compostela when he decided to have a break for a few hours.  At 1011 he was off again and by 1112 he reached a rubbish dump in A Coruña which seems to be his base for now when he isn’t hanging out at the coast. 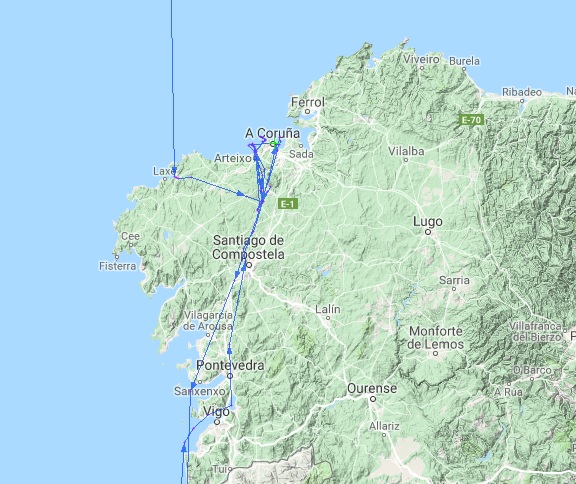 Map updated 22/04/19 José has reached England.  He obviously heard the weather was as warm as Spain and decided to check it out for himself.  He left A Coruña yesterday (21st) at 1252 and headed east along the coast to Viveiro.  By 1759 he was heading north across the Bay of Biscay and after a thirteen hour flight he was over Kerris in Cornwall at 0700 this morning. 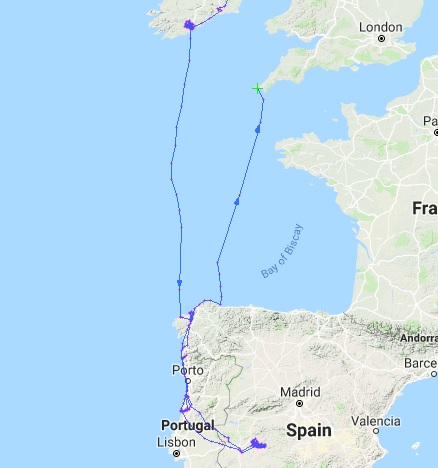 Map updated 24/04/19 So this is a wee surprise, José has headed over to the Republic of Ireland. This is where he spent the autumn before migrating south. He left Cornwall on Tuesday (23rd) at 1152 and and five hours later he was over Annestown . He headed inland for another hour before turning around and headed back to the coast at Ballydwan. He rested up by the coast over night and has continued west inland on Thursday and was last picked up foraging in fields near Pilltown at 1519. Remember José is four this year and will be on the search for a mate and a nesting place. Will he choose Ireland? 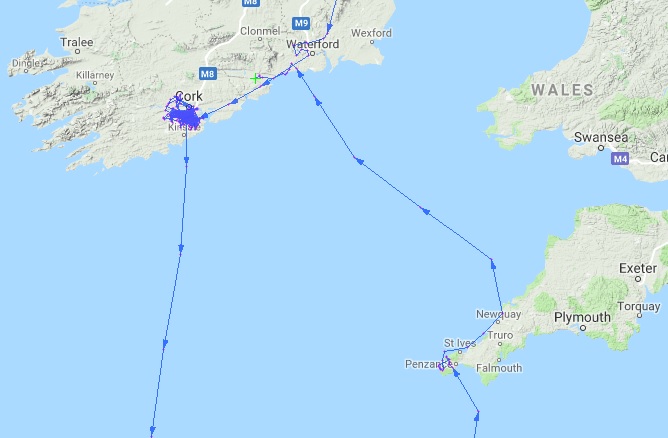 Map updated 27/04/19 José has been on the move again. After our last update on Thursday, José headed west to Carrigaline where he spent the autumn then yesterday morning (26th) at 0658 he headed back east to Cloyne and Shangarry before heading north east to Waterford where he was picked up at 1510. He continued flying in that direction for another two hours before landing in fields near Puddenhill at 1713. At 2015 he was picked up flying again and reached the River Boyne an hour later. He has stayed close to this area overnight and was last recorded at 0519 this morning. Where too next? 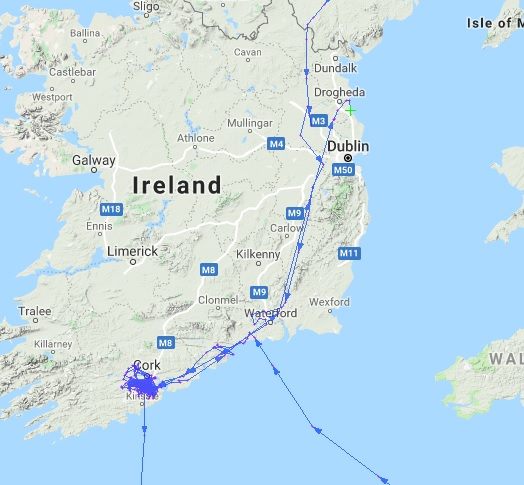 Map updated 01/05/19 After a couple of days exploring José is off again.  He spent three days in the vicinity of Drogheda until heading off north yesterday (30th) at 1349.  He was last recorded in the Republic of Ireland near Knockbridge at 1450 and an hour later he was in Silverbridge in the North for 3 hours foraging.  He then headed north east to Donaghcloney.  By 0108 this morning he was on Lough Neagh before his last upload at 0511 near Mallusk.  He looks like he will head to Scotland today but we will have to wait for his next update tomorrow morning. 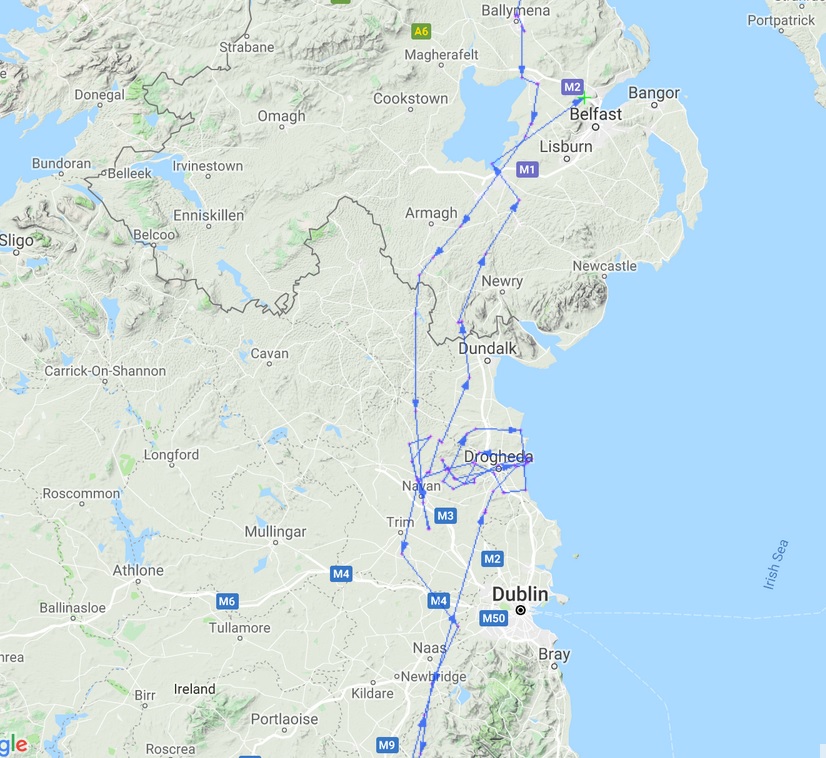 Map updated 02/05/19 And he is back!!!! He continued his migration from Northern Ireland yesterday morning where he left it’s shore round about 0630. At 1719 he was off the coast of Ailsa Craig and an hour later he was in South Ayrshire near Lagg. He carried on up to Ayr where he spent a couple of hours foraging in fields near Ailsa Hospital before flying past Irvine at 1127. By 1229 he was on Little Cumbrae where he roosted last summer. He spent a few hours there before heading over to Kilbirnie Loch yesterday evening at 1734. When will he visit us at Castle Semple? 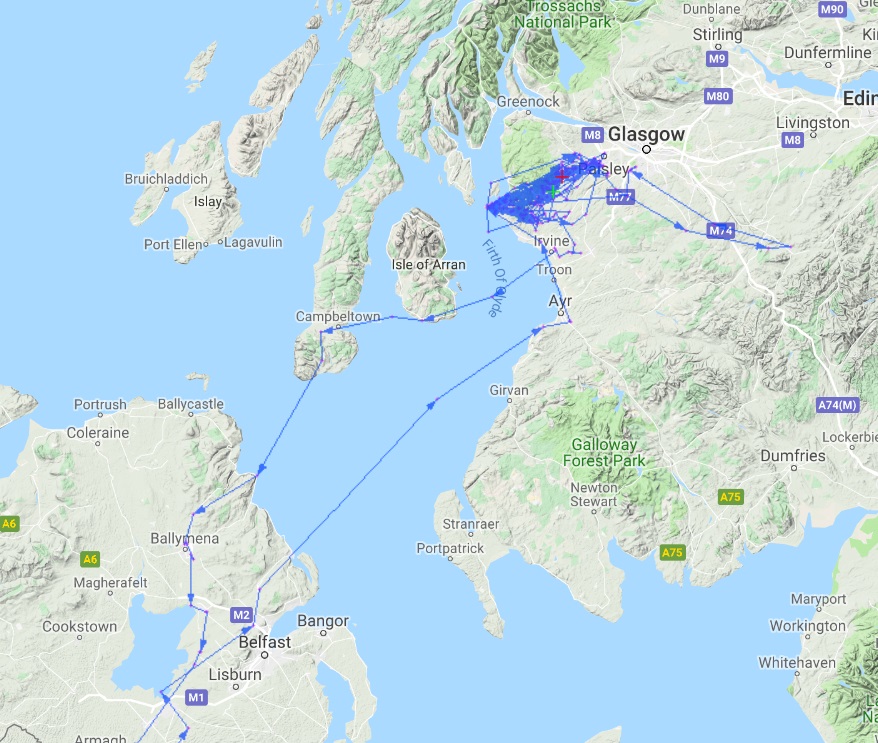 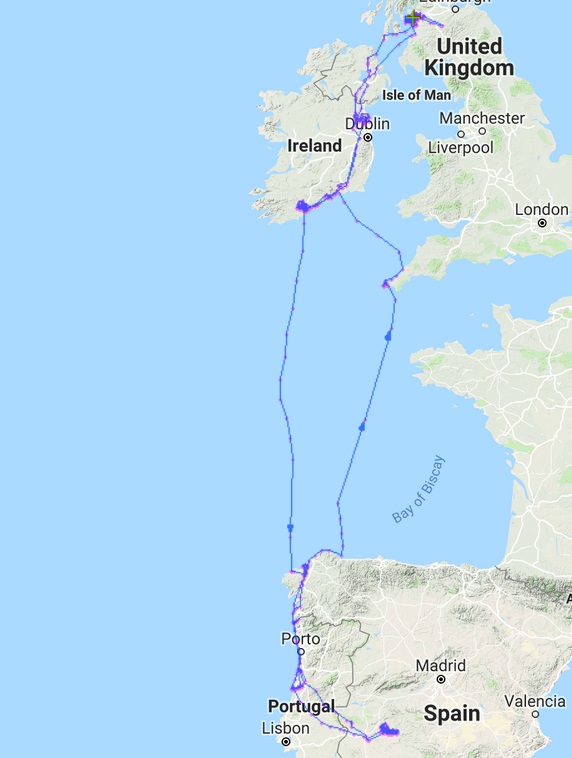 Map updated 14/05/19 José has been hanging about near Kilmaurs since his return to Scotland.  He is four years old and is yet to find a mate so has no set site that he is attatched too.  He never went to Kilmaurs after we tagged him last year so this is a new area for him.  He is foraging alot in the fields in the area. 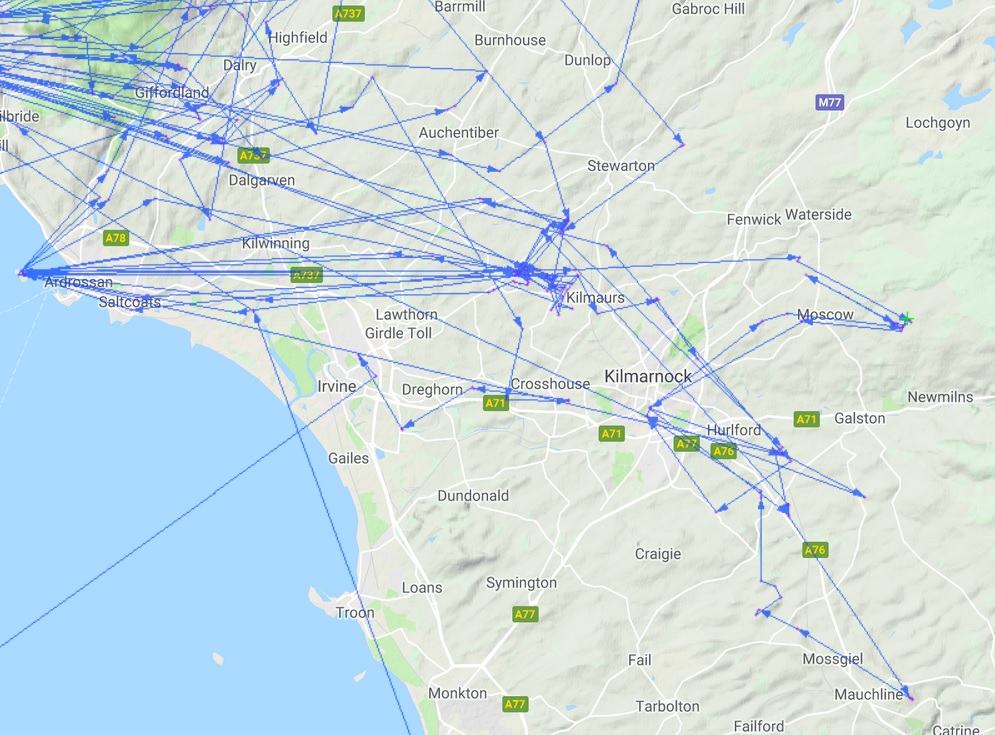 Map updated 12/06/19 Since our last update on José he has moved further inland and is hanging out in Lanarkshire.  We thought he might go to Strathclyde Country Park like Luke last year but he seems to prefer Bellshill where he is hanging out on the roof of DHL.  Luke also used this roof last year.  It’s intresting to see how two gulls that we both caught at the same site utilise similar areas a year apart.  Luke is still in Spain this year.  When he is not in Bellshill José has been foraging in fields near Glassford and Boghead. 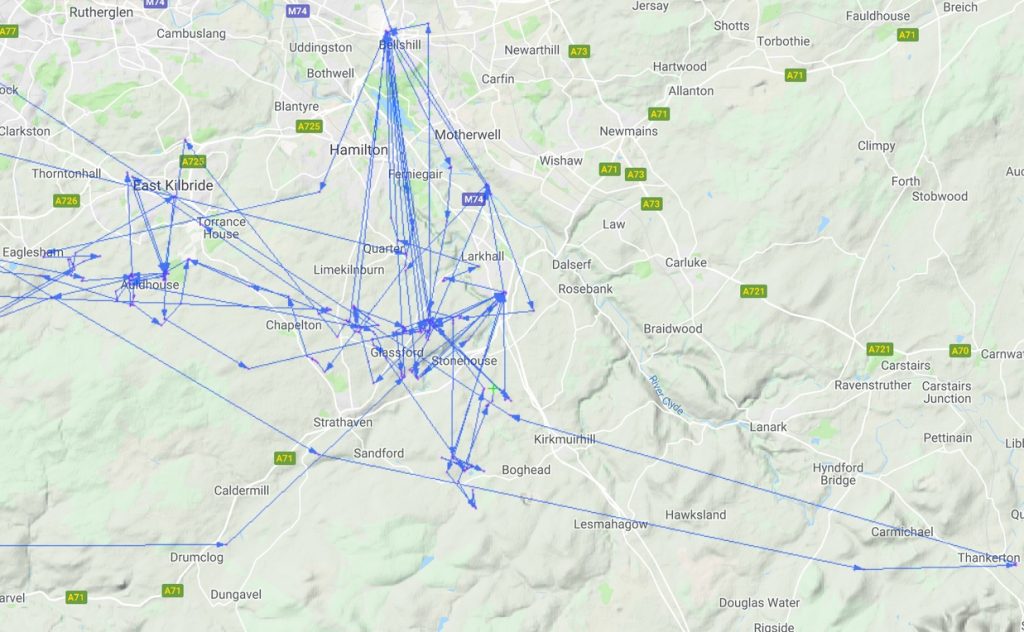 Map updated 29/06/19  As you can see from his map below José has been spending lots of time in South Lanarkshire.  He particularly farvours Bellshill and Drumclog but doesn’t appear to spend anytime at Strathclyde Country Park.  It’s highly unlikely he has mated this year but his movements around the different areas may help him find a mate for next year. 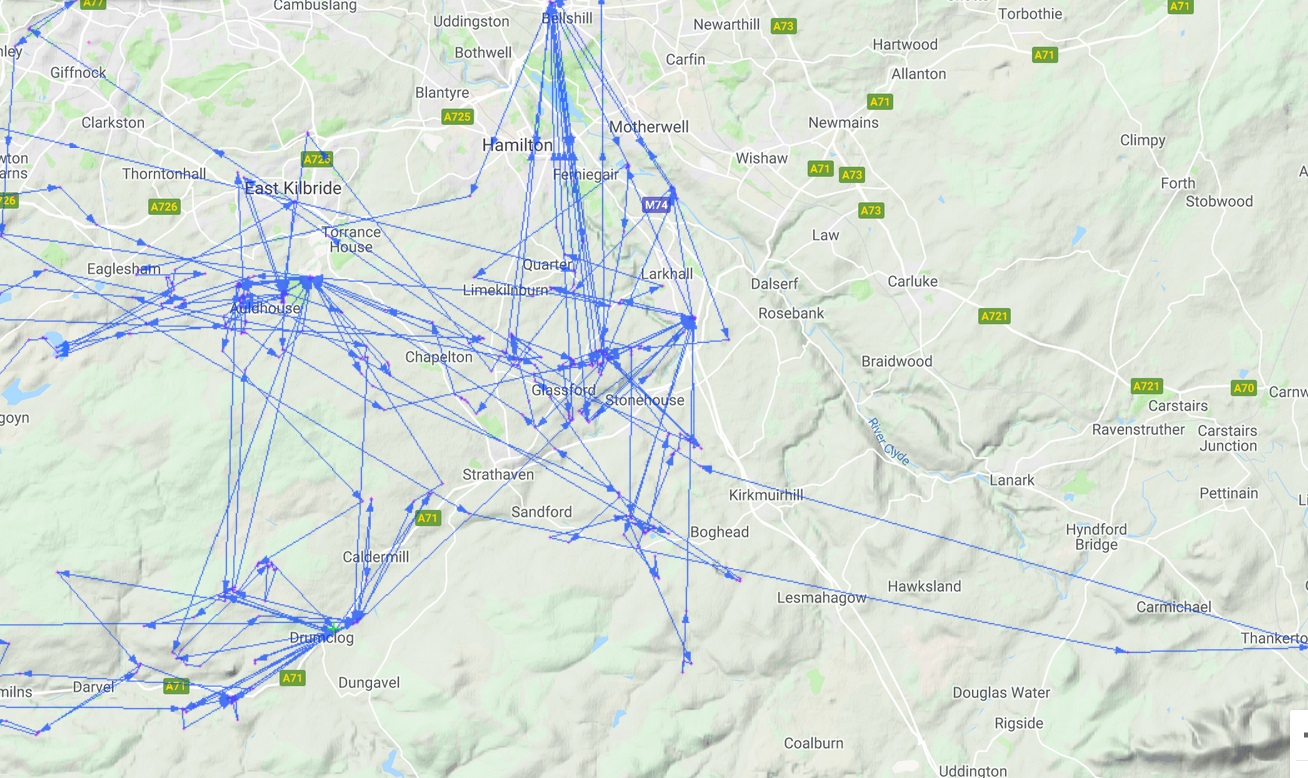 Map updated 12/07/19  We have uploaded a screenshot of José’s foraging pattern over the last two summers.  He is still hanging out in South Lanarkshire around Drumclog which aren’t far from his earlier haunts in the season near Kilmaurs as the gull flies. 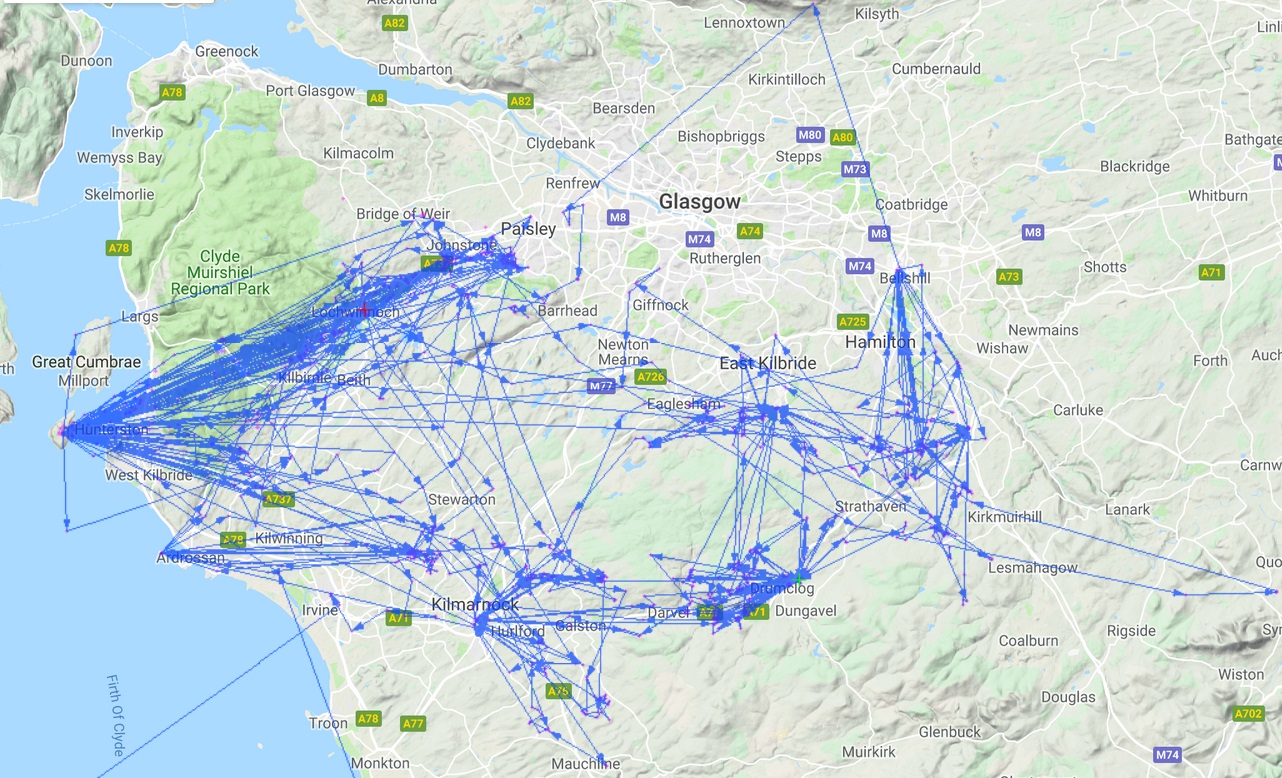 Map updated 30/07/19   José has returned to Ireland 3 months after leaving to head to Scotland.  He had headed down to Maybole on the 28th of July and on the 29th he started heading down the coast.  At 1739 he was at Girvan and a few hours later he was at Kirkcolm by Loch Ryan.  He was last picked up in Scotland at 2043.  He travelled west across the sea through the night and arrived in Northern Ireland just after 0600 on the 30th of July near Larne.  He carried on in a westerly direction before starting to fly south at 0852 near Belfast airport.  He spent a few hours around Ballynaskeagh before heading into the Republic of Ireland at 1400.  He continued south and was last picked up at 2035 near Beaupark where he has been since 1616. 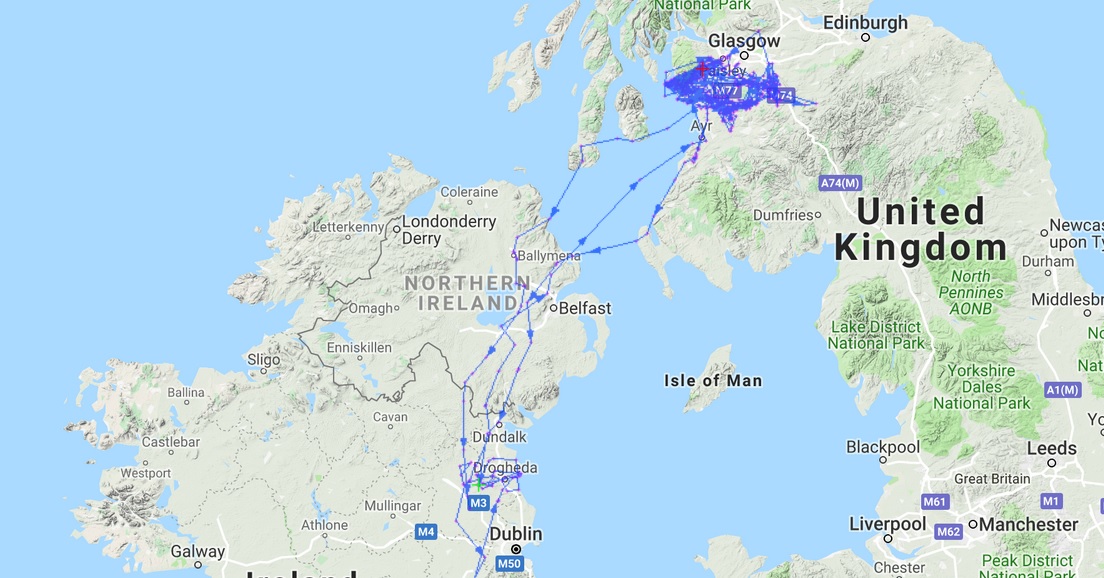 Map updated 01/08/19 José has continued his journey south for about 8-9 hours and was last picked up at 0710 this morning south of Waterford.  He is starting to head back into familiar territory and we expect him to head towards Cork next. 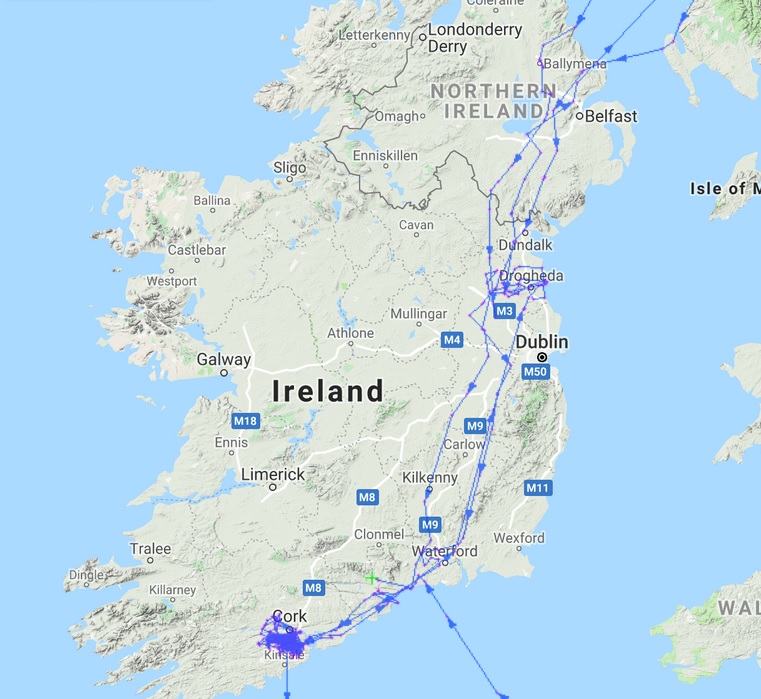 Map updated 12/08/19 José has spent the last couple of weeks back in his old stomping grounds south of Cork.  He is very familar with this area after spending time here last autumn and the map below shows this year’s and last year’s foraging pattern. 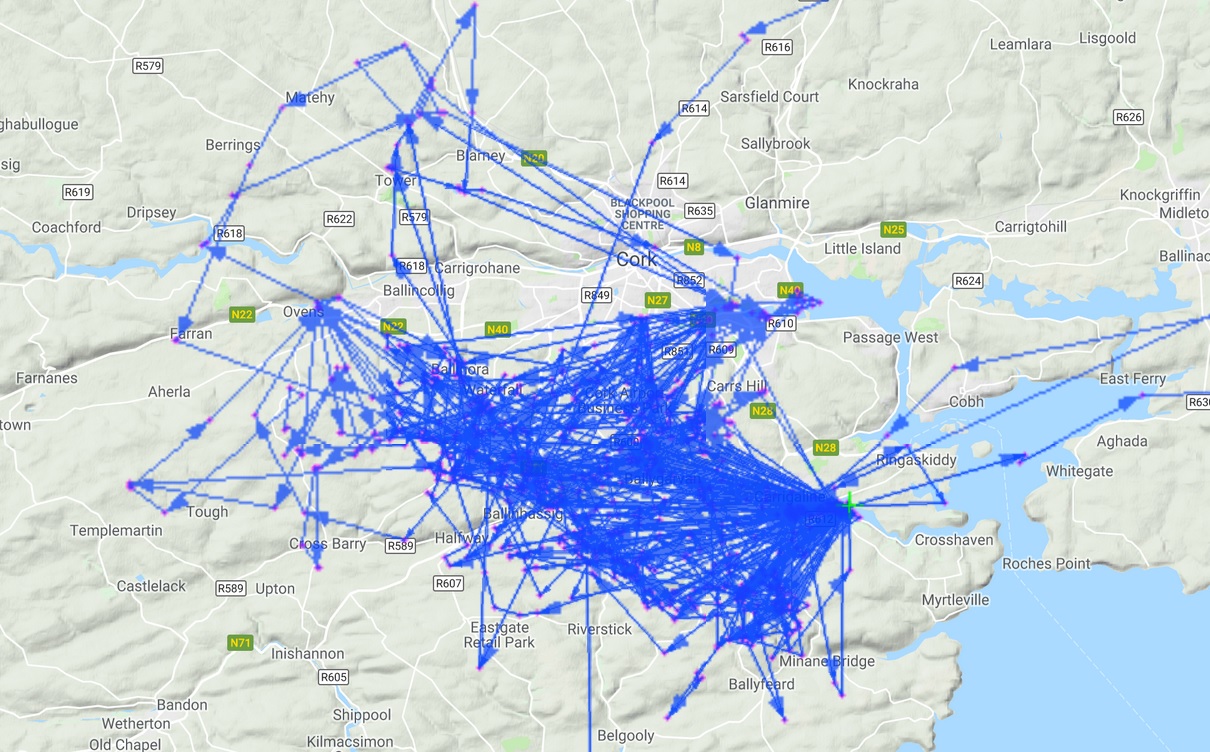 Would you like to adopt José and see your name here?  Then found out how you can adopt him here