Happy Gullmore is an adult male Lesser Black-backed Gull.   He was hand caught at Castle Semple Loch in Lochwinnoch on the 31st of May. After tagging he very quickly returned to Little Cumbrae and it looks like he has a mate and a nest site on the island.

Happy Gullmore weighs in at 845g and has a wing length of 421mm.  He can be identified by his colour ring 13V:C.

Click this link to see Happy Gullmore’s movements in 2019


Over the first few days of tagging we can see Happy Gullmore spent most of his time at Little Cumbrae where he has a nest before making his first return trip to Lochwinnoch 4 days. 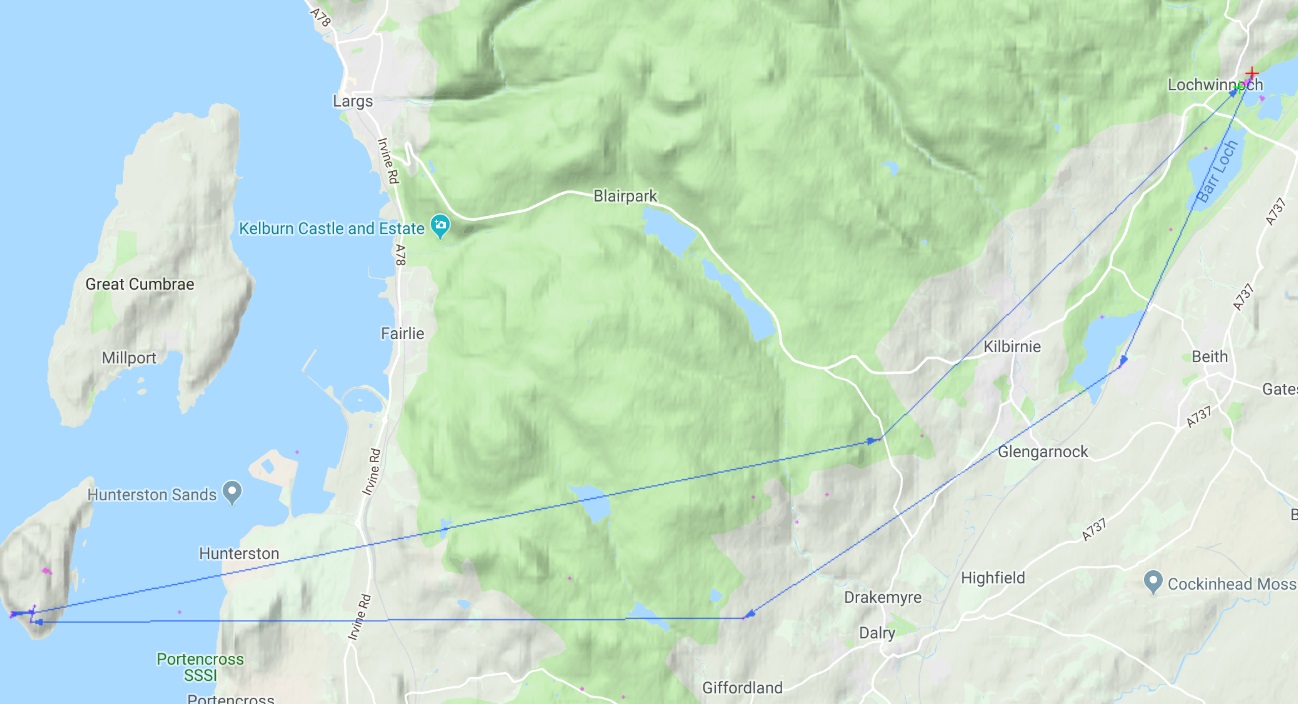 Map updated 13/06/18 As you can see Happy Gullmore has a pretty obvious foraging pattern between his nesting site on Little Cumbrae and Lochwinnoch.  Keep an eye out for his colour ring at Castle Semple Loch.

Map updated 20/06/18 Happy Gullmore has a couple of places he seems to be favouring when not on Little Cumbrae. One is Castle Semple and the other is the roofs of the whisky bonds in Glengarnock where Clyde had his nest last year.

Map updated 05/07/18 Happy has still been foraging at the Loch and travelling back to Little Cumbrae but over the last few days he has gone a bit further afield.  He made one trip to the River Clyde near Daldowie Crematorium in Glasgow taking in TJ Hughes in Glasgow on Argyle Street where he spent a few hours. He also made a wee trip to Stanley Reservoir in Foxbar.

Map updated 11/07/18 Happy appears to still be busy rearing chicks whick is good news.  ike 12V:C he regularly returns to visit us here at the Loch.

Map updated 01/08/18  Happy’s movements are pretty much the same since we updated you before our holidays.  He did make a couple of flights into South Ayrshire but he is still visiting us here at Castle Semple and was spotted here on Monday along with Stuart.

Map updated 09/08/18 Another off our gulls have left Lochwinnoch and this time it’s Happy Gullmore. On Saturday the 4th of August, Happy was at Castle Semple at 0918.  An hour later he was back on Little Cumbrae. Happy nested on Little Cumbrae and was seen regularly at Castle Semple Loch so we thought this was just the norm for him.  However, an hour later he was on the Isle of Arran at Brodick before visiting Whiting Bay and Blackwaterfoot.  Come the afternoon he was over the Mull of Kintyre and was picked up at the lighthouse at 1523.  Just over an hour later he had reached Northern Ireland. He flew south down to Belfast where he was picked up in the early hours of Sunday morning and then turned in a south west direction flying over Ballyskeagh and Gamblestown before arriving in fields near Poyntzpass at 0950.  He stayed there resting and feeding up before heading off again later on in the afternoon after 1500.  He then flew west towards Keady before flying south into the Republic at 1909.  He headed all the way down towards Drogheda before flying west and then south to Kilmessan where he was on Monday morning at 0714.  This wee village was also a stopoff site for José who was caught at Castle Semple on the same day as Happy but left to go to Ireland before him.  The more birds we tag the more we start to see patterns forming and favoured places popping up.  We will leave Happy there for now and will update you on his movements soon.

Map updated 16/08/18 Happy has been busy exploring the last week and has been up at the Lough above Navan as well as spending alot of time in fields near Edenderry.  He has also taken to hanging around the meat factory which is located there aswell. We hope he is careful!

Map updated 31/08/18 As you can see from the maps above and below Happy has settled into a routine which involves sleeping at the Lough above Navan each night.  Ollie is also spending the nights here as well.

Map updated 17/10/18 No change with Happy.  He is still following the same routine.  We will update you next if anything changes.

Map updated 27/10/18 Well the temperature certainly dropped last night and in doing so Happy decided to no longer have cold feet and took off from Kildare at 1700 where he has been hanging out for the last few days. After a three hour rest in Wexford he left the Republic of Ireland at 0200 this morning and he arrived in Tapia de Casariego, Spain at 1021 after an eight hour flight across the Bay of Biscay. He then carried on in a westerly direction and arrived in A Coruña at 1626. Many of our gulls have been photographed here. Will Happy pose for a snap?

Map updated 01/11/18 Happy has travelled a short distance south into Spain and has spent the last few days resting and refuelling after his migration from Ireland.  He is currently spending alot of time at a landfill site south of Viris.  Landfill sites in Spain are popular places with our gulls.  Surprisingly we rarely find them using them in the UK.

Map updated 06/11/18 After a few more days of resting Happy is off again.  He has flown south west towards the Spanish coast and is currently heading south.

Map updated 08/11/18  Happy has very briefly crossed into Portugal before heading north back into Spain and is currently at a large industrial estate.

Map updated 13/11/18  Happy has continued on his journey south and has made it one of our gulls favourite locations, the Costa de Caprica beach and he has been spotted! Unfortunately we don’t have a photo but it’s great to know he is looking well.  Stuart was on this beach back in October but has since moved further south.  Will Happy do the same?

Map updated 22/11/18  After a few days hanging out on the beach Happy is off again.  He has flown to the southern Portuguese coast and has followed the coast east to Faro.  He looks like he is still moving.  We can’t wait to see his next update.

Map updated 25/11/18  Happy is continuing to follow the coast east.  He has now crossed into Spain and is in Cadiz.  Will he continue following the coast and cross the Strait into Morrocco?

Update 05/11/18 It looks like Happy is out of range for any data to be downloaded from his tag.  Not to worry though as it will continue to collect and when we hear from him we will let you know how he is getting on.

Would you like to adopt Happy Gullmore and see your name here?  Then found out how you can adopt him here