Happy Gullmore is an adult male Lesser Black-backed Gull.   He was hand caught at Castle Semple Loch in Lochwinnoch on the 31st of May. After tagging he very quickly returned to Little Cumbrae and it looks like he has a mate and a nest site on the island.

Happy Gullmore weighs in at 845g and has a wing length of 421mm.  He can be identified by his colour ring 13V:C.


Map updated 21/03/19 After months of silence he has came back within range and we have started to get the data off of Happy’s tag. So far, as it’s downloading, it is showing us that he made it to Morocco on his migration after his last update on the 25th of November in Cadiz in Spain. He spent the evening in Cadiz before flying south into Morocco on the 26th of November, making landfall at Kenitra at 0800.  We have alot of data to analyse but visually we can see he has spent the last few months making his way down the coast to Casablanca.  Did he go further south?  We are just waiting on the next data download. 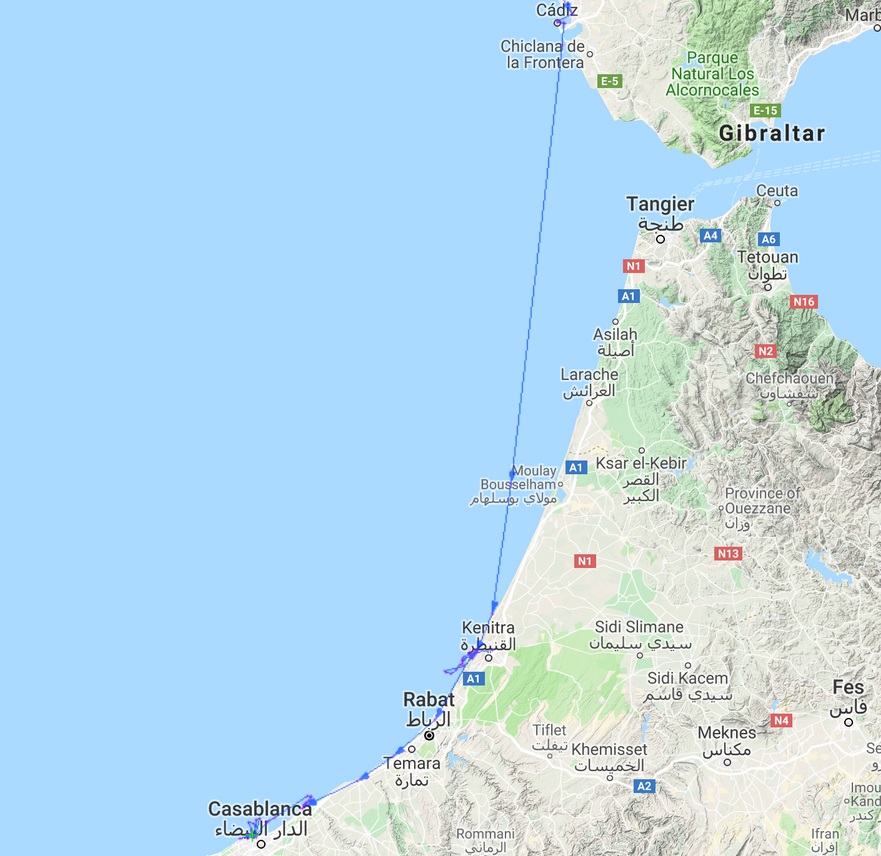 Map updated 21/03/19 So we have had a chance to analysis the data as the tracking website has uploaded and we have gathered the following info so far.  From what we can see is that in November, Happy flew into Morocco where he arrived at 0900 on the 26th on the banks of the Sebou River. He hung about on the sandflats and at the Port of Mahdia until the 12th of December before continuing further south to Mohammedia. He spent a few days here before arriving in Casablanca on the 15th. He has then spent the last three months living it large at the port until yesterday, the 20th of March. At 0909 he left Casablanca and flew north following the coast all the way up towards Larache where at 1848 he started flying across the ocean making landfall in Portugal at 0308 this morning, a flight time of 8 and a half hours. His last update was at 0719 where he was over Tavira. It took him a month to fly from his autumn site in Ireland to Morocco, how long will it take him to return to Lochwinnoch and what route will he take? 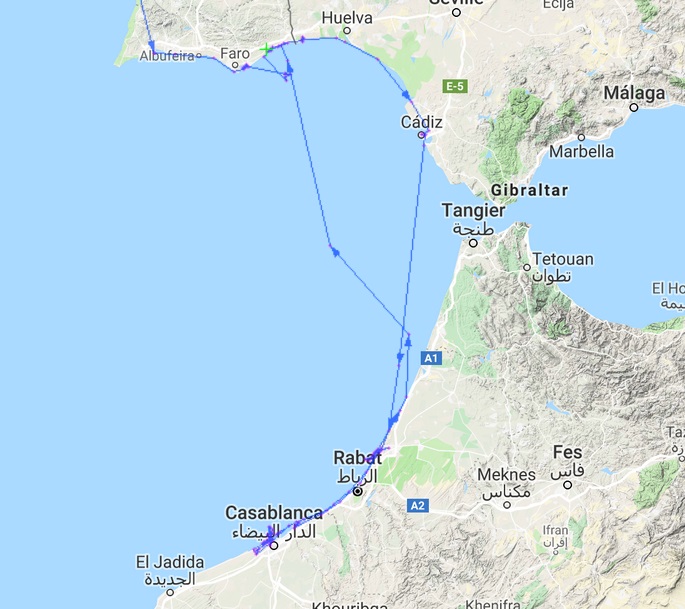 Map updated 25/03/19 Happy is progressing north at a steady rate.  He carried on up the coast before heading inland at Viana do Castelo He flew into Spain just after 1000 this morning.  He arrived in Pontevedra in the early afternoon and spent 3-4 hours resting and fuelling up before heading north again.  At 2030 he was flying over As Casas Novas and is only an hour or two from hitting the northern coast.  Hopefully he will head to A Coruña where we have a network of gull spotters. 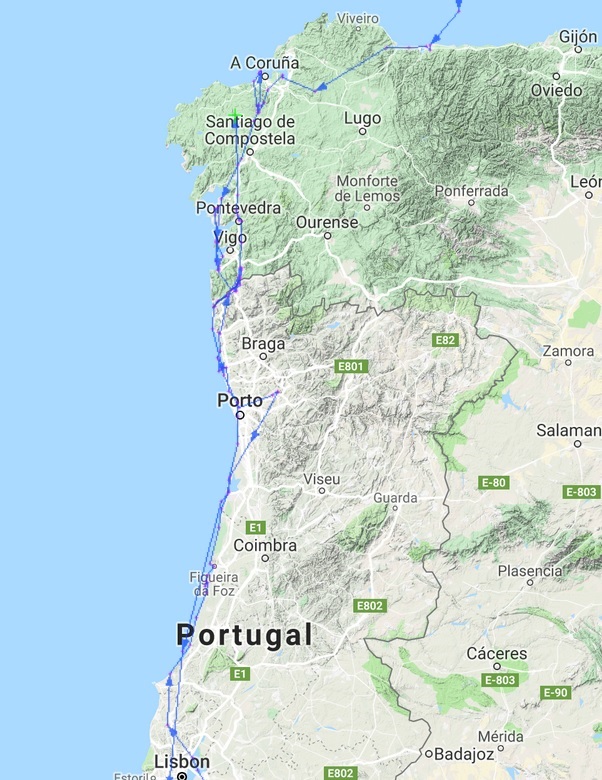 Map updated 29/03/19  Happy has spent the last couple of days hanging around in A Coruña while waiting on the wind to die down.  With the change in the weather yesterday he headed off againat 1030 in the morning and followed the coast east.  He was last picked up over Cariño at 1548 in the afternoon.  Hopefully he will currently be crossing the Bay of Biscay.  As soon as we know we will let you know. 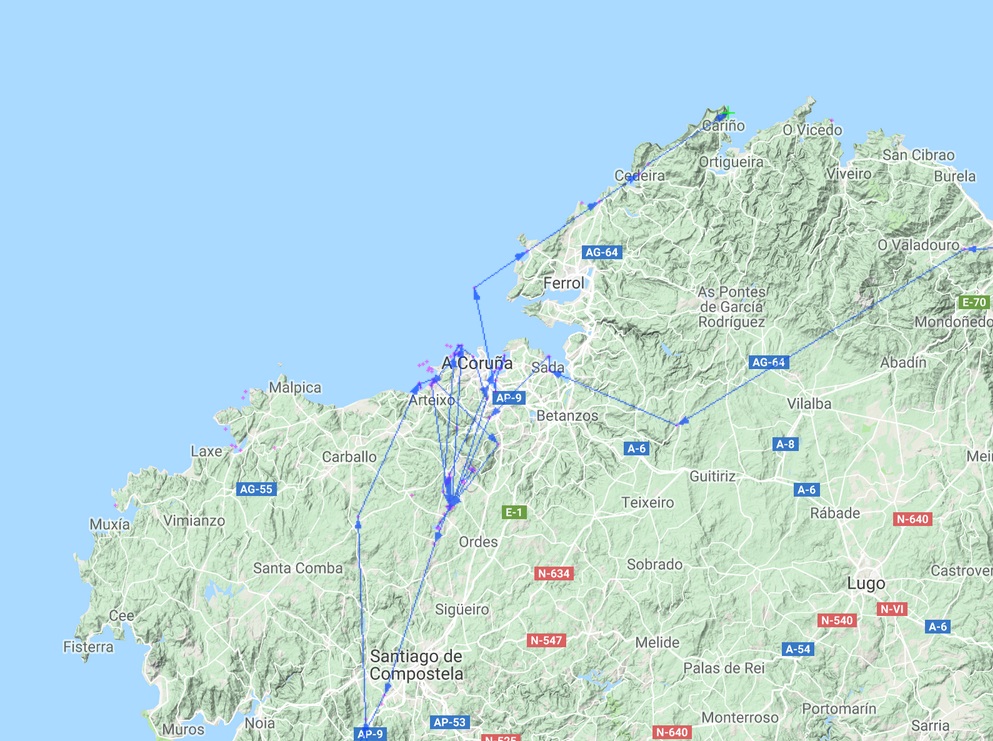 Map updated 01/04/19  Happy attempted to cross the Bay of Biscay on the 30th at 0531 but for someone reason, possibly the weather, he had to abort his attempt and return to Spain after a 31 hour flight.  He is currently hanging out near Gijón and we will wait and see what he has planned next. 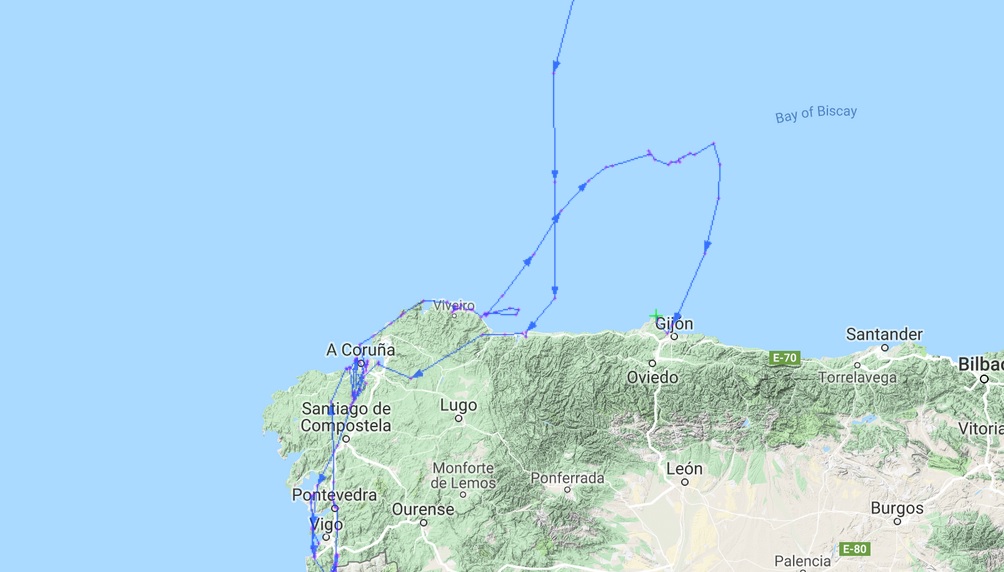 Map updated 07/04/19 Harry has spent the last few days resting before attempting to travel north again on the 4th of April. This time he followed the Spanish coast east before making a short crossing over the Bay to Mimizan in France at 1012. He carried on north following the coast passing over Rochefort and La Rochelle later on that day. He carried on a wee bit further north and has since spent the last couple of days exploring the region.He was last picked up at Olonne-Sur-Mer at 1825 last night (6th). 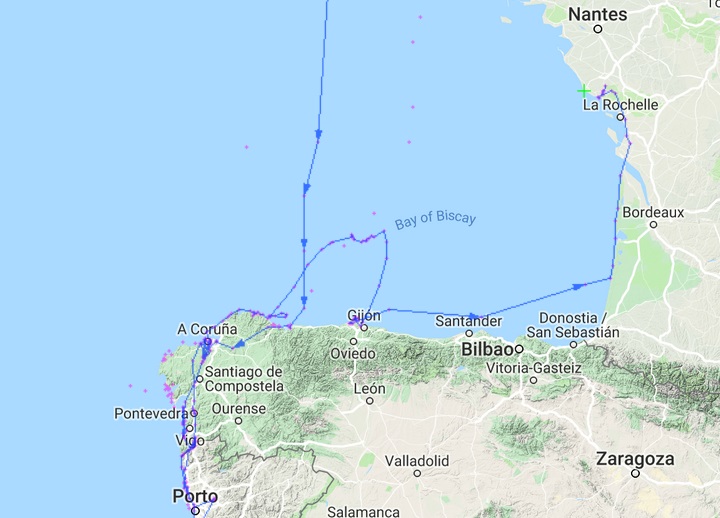 Map updated 14/04/19 We are happy because Happy Gullmore arrived home to his breeding colony on Little Cumbrae just after 1400 this afternoon, He has spent the last few days travelling from France. He left Saint-Alban on the 11th at 1646 and flew overnight across the channel and arrived in Devon by 0600 on the 12th. He continued through Devon to reach Swansea Bay in Wales by 1600 that afternoon. He then headed towards Carmarthen before turning south west to Carmathen Bay where he rested up from 1927 that night until 0231 the following morning (13th). He was off again come dawn flying north and was passed Anglesey at 2100. He reached the Isle of Man just before midnight and followed the north coast before leaving just after 0600 and headed north into Scotland. He was picked up in Dumfries and Galloway at 0707 still heading north. He was over Lagg in South Ayrshire at 1315 before arriving home. Happy Gullmore is our fourth gull home and in the last 24 hours he has flown 162km and 7441km overall since being tagged. It has taken him 25 days to return home. Will he come and visit us at Castle Semple tomorrow? Look out for his colour ring 13V:C 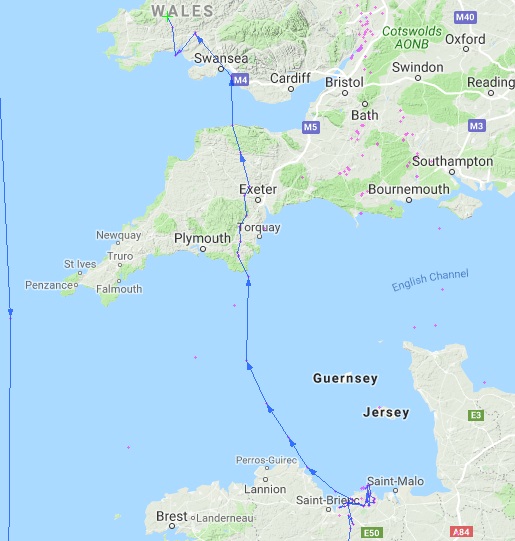 From France to Wales 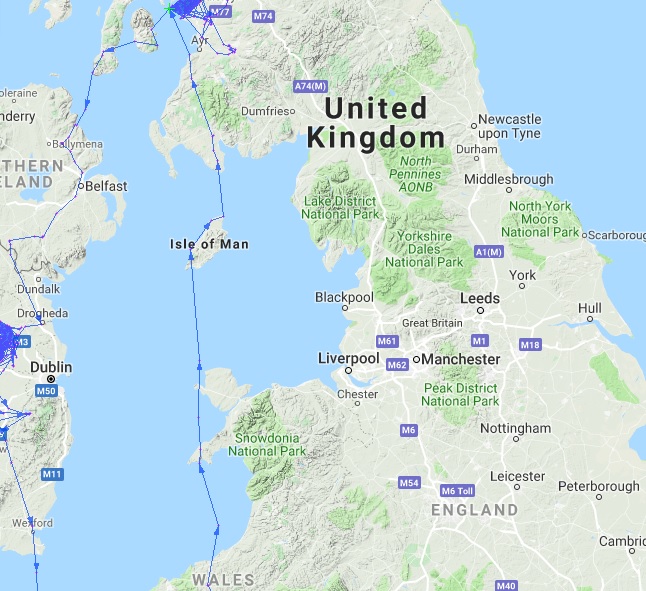 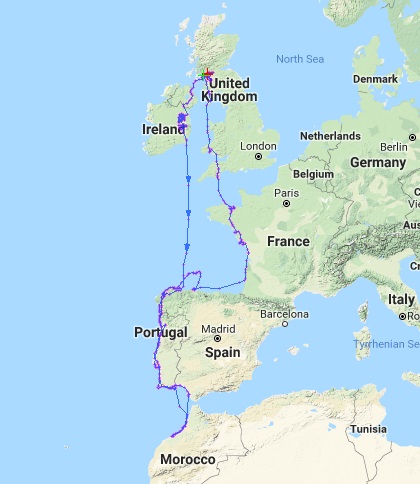 Map updated 22/04/19 Happy is spending alot of his time on Little Cumbrae where hopefully he has met up with his mate.  He has been coming inland to forage, particularly in fields around Kilwinning and Stewarton but was not picked up at Castle Semple until the 18th at 1558.  Since then he appears to favour coming to visit us from 1400 onwards.  We haven’t spotted him yet but hopefully today will be the day. 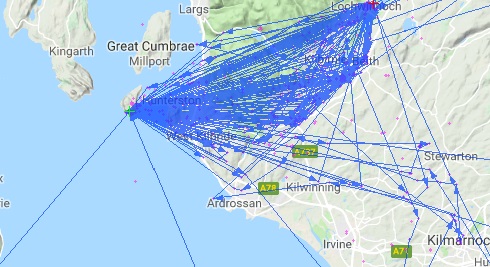 Map updated 15/05/19 Happy is spending alot of time on Little Cumbrae which tells us that he is helping his mate with their nest.  Hopefully he will have a succesful breeding season this year. 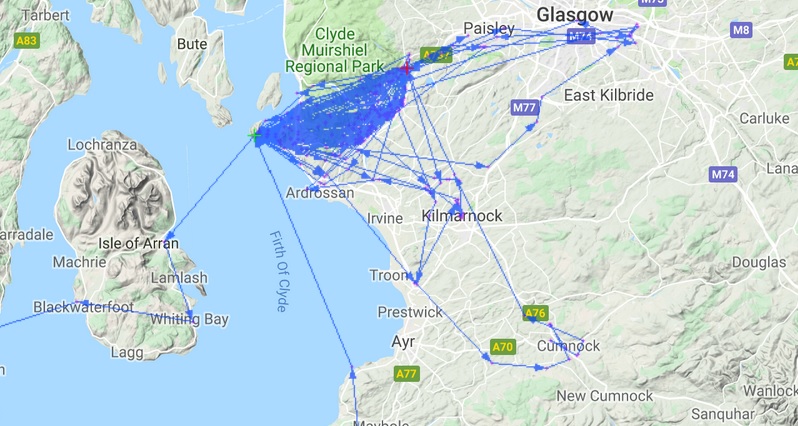 Map updated 13/06/19 All the signs suggest that Happy is now rearing chicks on Little Cumbrae.  When he comes to the mainland he pays trips to Castle Semple and also likes to hang out on the roofs of the whisky bonds in Glengarnock.  We are also pleased to see that he still doesn’t visit Largs.  In fact none of our tagged gulls do which shows, with other research, that they don’t need to eat chips.  Our Lessers foraging patterns show us they much prefer natural food like worms. 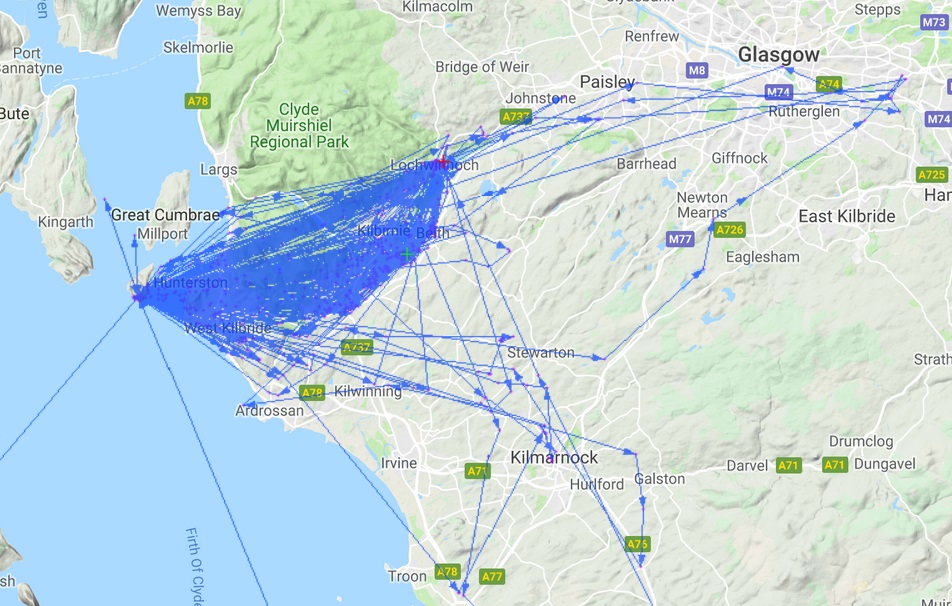 Map updated 30/06/19  No change with Happy.  He seems, like most of the gulls, to be busy looking after his chicks. 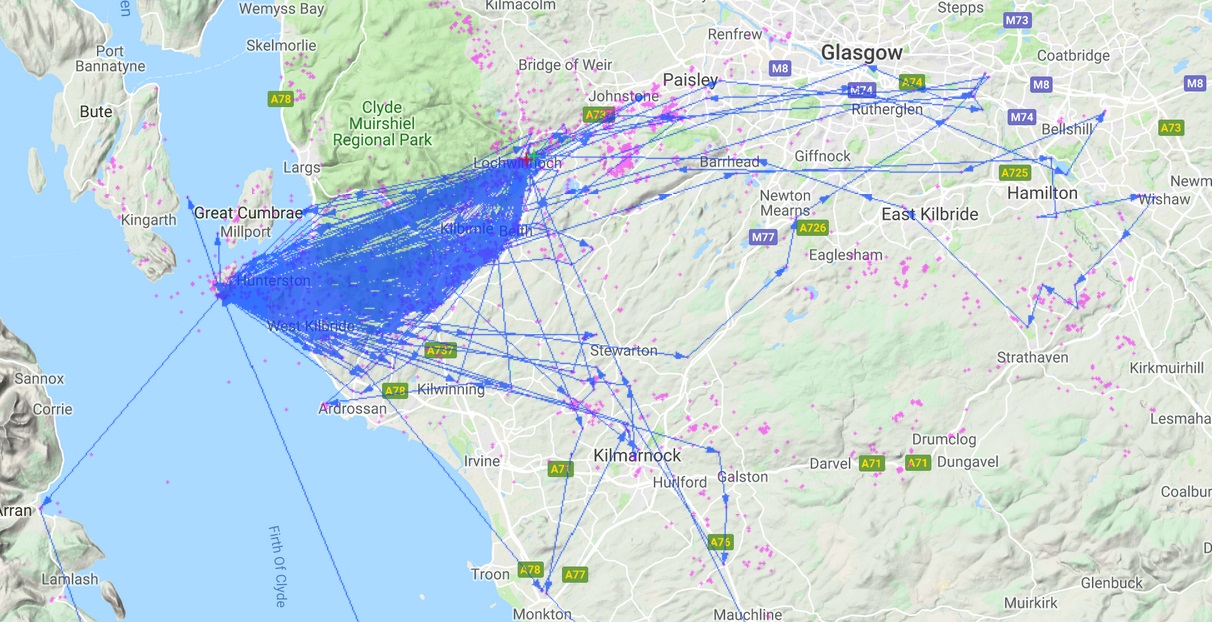 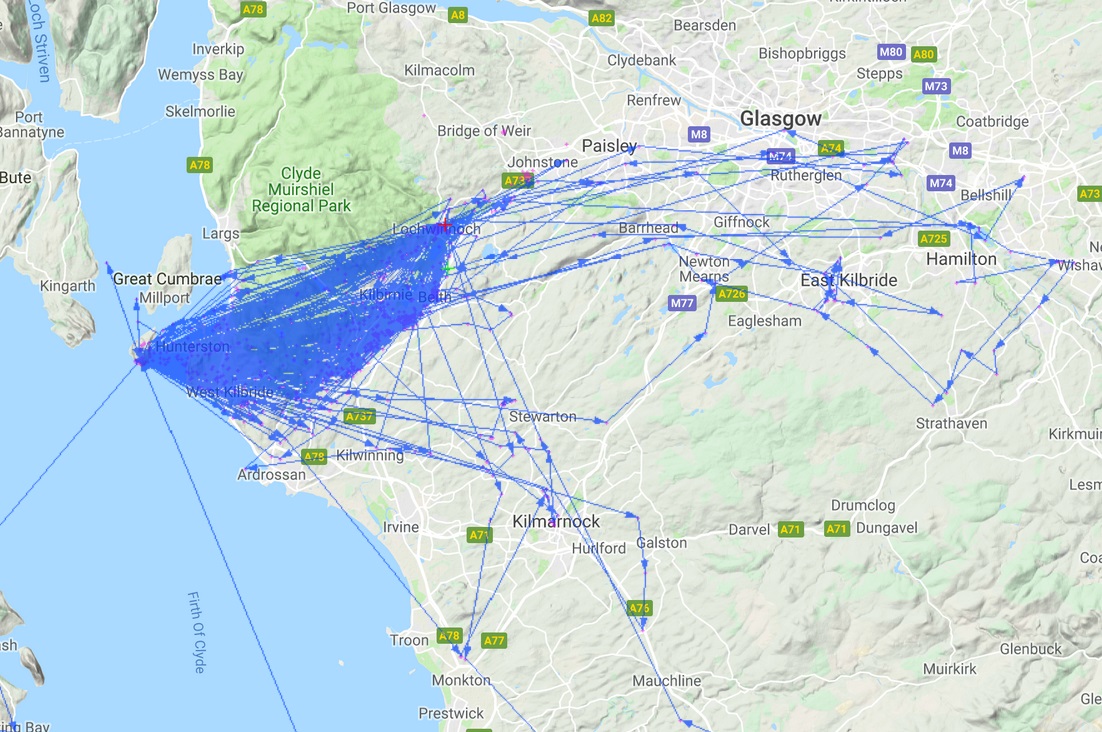 Map updated 13/08/19  We haven’t heard anything from Happy for the last month but this morning his tag reconnected and we can see he has made it over to Ireland.  Unfortunately it looks like his tag lost it’s charge and hasn’t collected any data for the last month.  Hopefully this has now been rectified and we can continue to see what he is up to.  Currently we can see he is back in Navan, his haunt last autumn. 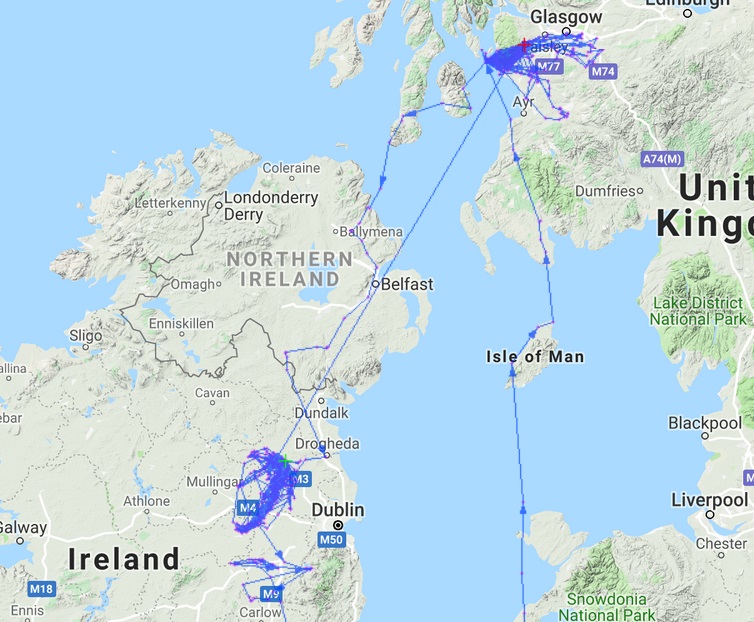 Would you like to adopt Happy Gullmore and see your name here?  Then found out how you can adopt him here