Eric Flapton, the grumpiest gull we have ever handled

Eric Flapton is an adult male Lesser Black-backed Gull and we have to admit he is the grumpiest gull that we have ever handled.  However, we managed to tag him quickly with only a few bites before he was released.  He was caught in one of our nest traps on the Isle of Pl

adda off the south coast of Arran. His nest has three eggs. Eric weighs in at 890g and has a wing length of 438mm.  He can be identified by his colour ring 0L4:C.


Map updated 07/01/19 Eric is still in Portugal at Samora Correia.  In the last few days Gary has appeared nearby.  It will be interesting to see if their foraging routes overlap.

Map updated 24/01/19 Eric has been spending time in the fields on the north bank of the River Targus.  He decided to take a wee flight north yesterday so it will be interesting to see where he turns up next. 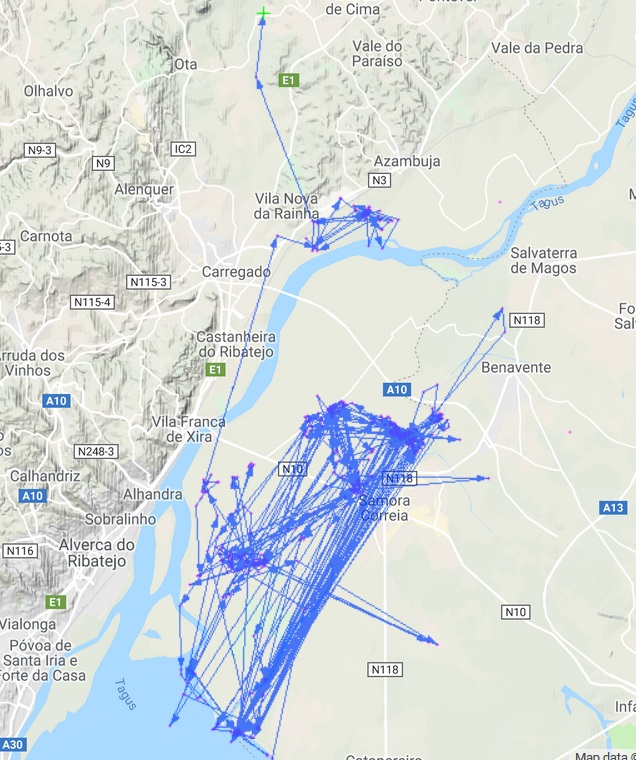 Map updated 21/02/19  Eric is really concentrating his foraging efforts on the north bank of the River Targus.  There is alot of arable land in this region so plenty of feeding for him. 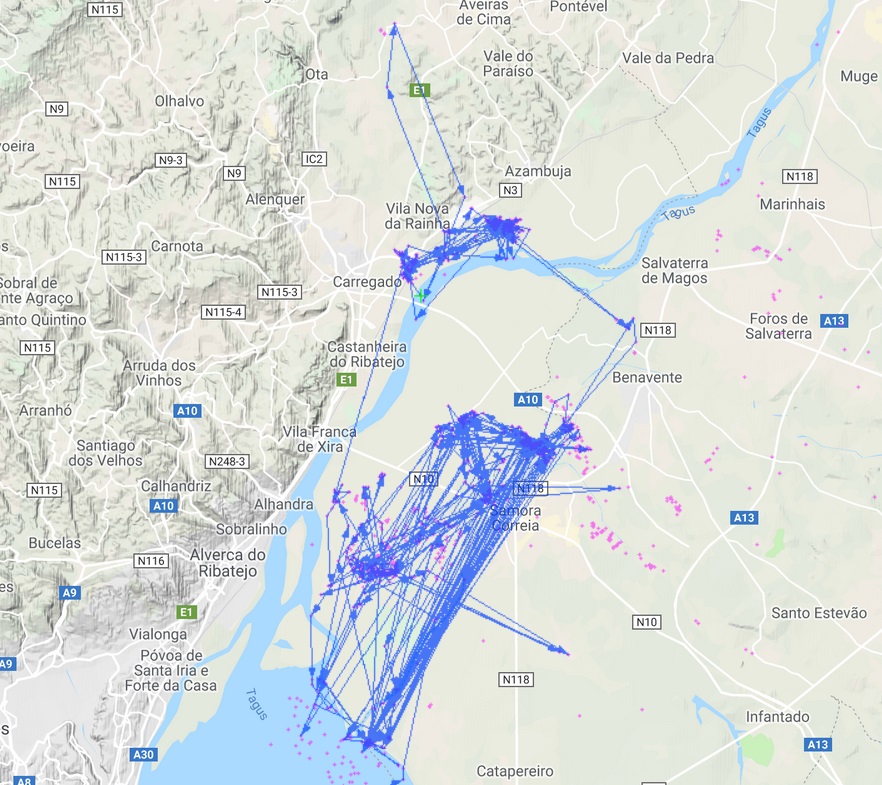 Map updated 13/03/19 Eric has returned to the area on the south bank of the Targus which he frequented on his arrival in Portugal.  Plenty of foraging oppurtunities for him here in the town and in the farmland round about. 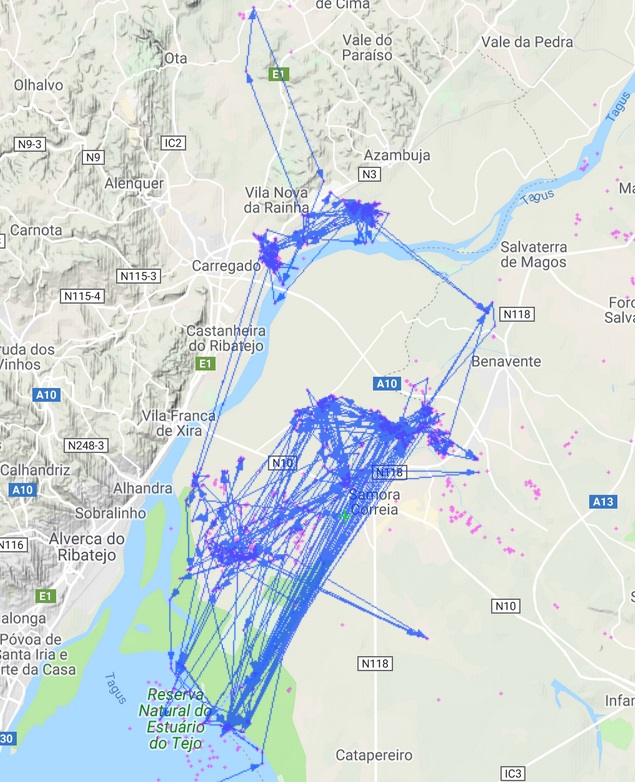 Map updated 20/03/19 It certainly looks like the wind is getting under our gulls wings and pushing them home now. A second one of our gulls, Eric has left his wintering grounds yesterday and headed towards the coast. He spent the winter on the banks of the River Targus at the nature reserve above Lisbon, the same area Gary has been overwintering in. Yesterday afternoon, the 19th, he headed north west with a brief stop over on the roof of a pizzeria in Brejo. He is currently near Atalaia and will hopefully follow the coast north. José is about 100km further north at Figueira da Foz. 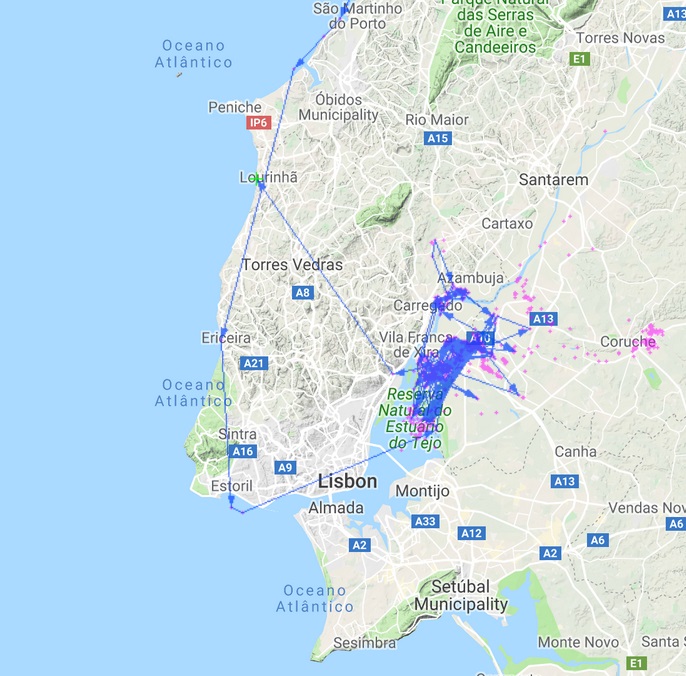 Map updated 29/03/19 After heading to Lourinha, Eric continued up the coast to Figueira da Foz where he has spent almost a week foraging on nearby agricultural land while waiting for the winds to change.  Yesterday morning he was off again and has headed back towards the coast. 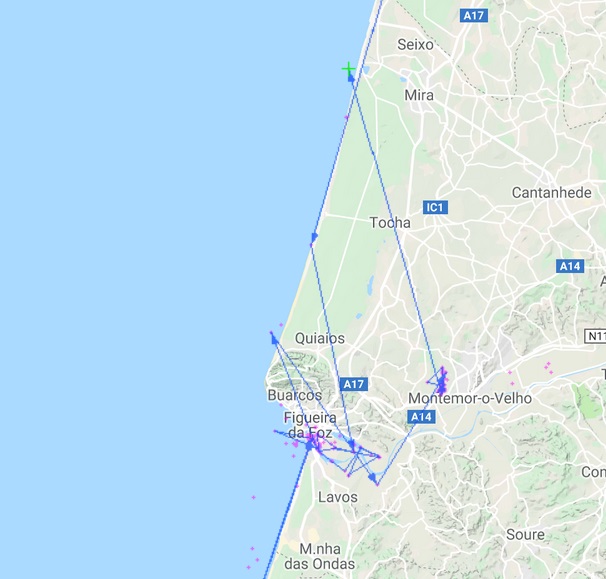 Map updated 06/04/19 Eric is currently flapping his way back to us! When we last updated you about him on the 19th of March he was making for the Portugeuse coast. He hit the coast and continued north to Figueira da Foz where he remained until the 30th of March. In the last week he has steadily been making his way north following the coast and crossing into Spain on the morning of the 31st. He has stuck tightly to the coast all the way to Foz in the north where he arrived at 2048 on the 3rd of April. He spent the next 24 hours fuelling and resting up before heading off at 2018 on the 4th of April along the coast before flying over to the wee island of Las Pantorgas at 0823 yesterday morning (5th). He stayed here until 1231 before making the epic crossing of the Bay of Biscay. He reached the tip of France at Plogoff in Brittany round about midnight (a journey of roughly 12 hours) and was last picked up near Beuzec-Cap-Sizun at 0448 this morning. It’s looking like he may be our second gull to return home. Eric is from Pladda so it will be great to see what the next few days brings. 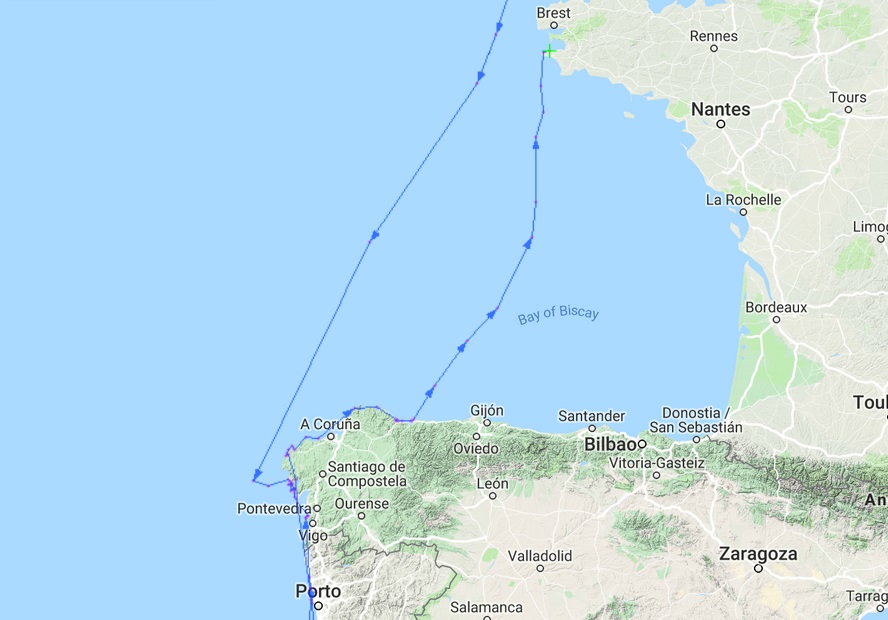 Map updated 10/04/19 Eric has made it to England. He spent a couple of days in France after arriving there in the early hours of the 6th. He left France at 1800 on the 8th and flew across the channel and was picked up in Cornwall at 0017 on the 9th. He flew to the River Hayle (much to the delight of TnT member Hayley) where he stayed until 1200. He then travelled up the Cornish coast and was last picked up just south of Boscastle at 0456 this morning. 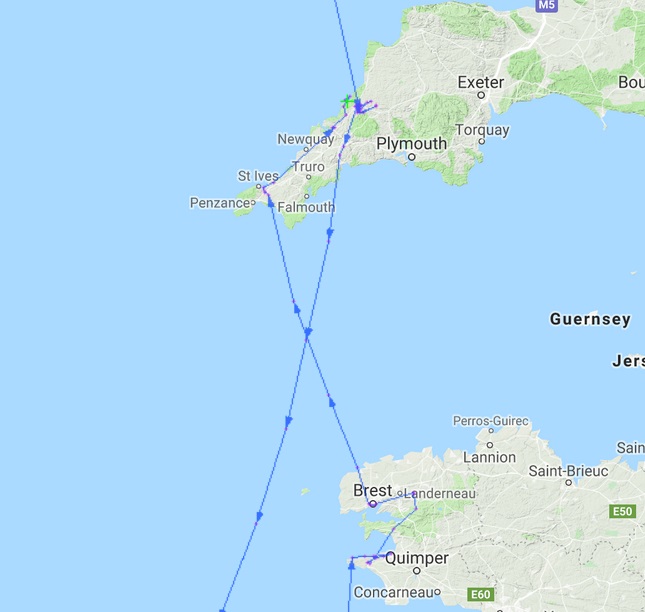 Map updated 13/04/19 Eric Flapton has returned to his nest site on Pladda! He arrived in the early hours of this morning and is the 3rd of our tagged gulls to return home and the first to return to Pladda. He carried on up the coast of Cornwall on Thursday and overnight flew into Wales where he was picked up as 0412 on Friday morning in Pembrokshire. He then headed over to the Isle of Skomer at 1022 which hosts a large seabird breeding colony. He then turned west and followed the Welsh coast up to Anglesey where he was last recorded at 2051. Four hours later he was back on Pladda. His return journey took 24 days in total. Welcome home Eric!! 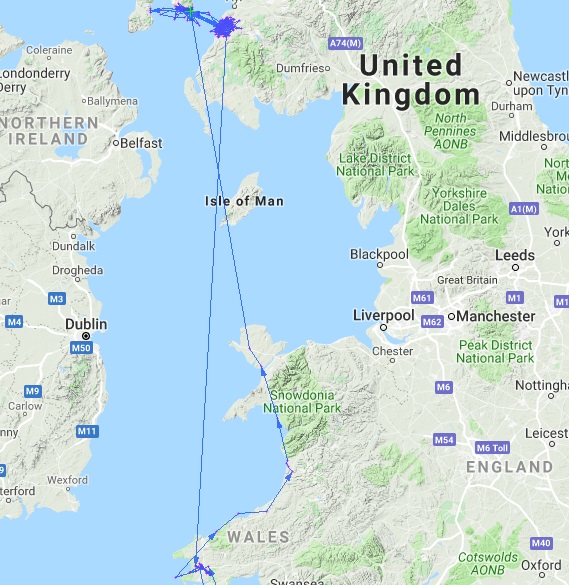 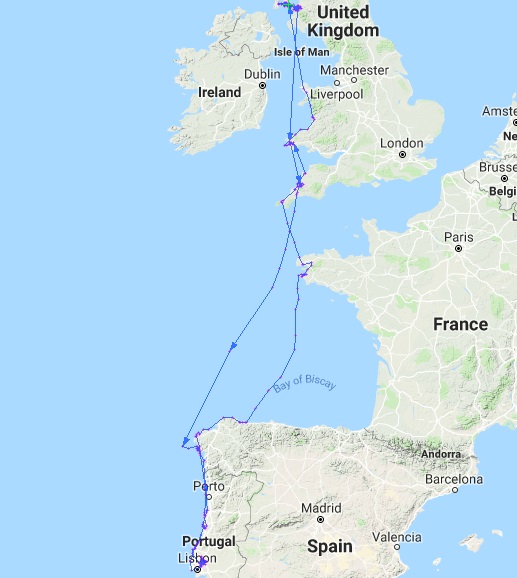 Map updated 22/04/19 Eric is spending alot of time on Pladda since his return and hopefully he has met up with his mate again.  His map below shows last years foraging pattern as well as this years and so far we can see he has been returning to some of his old haunts in South Ayrshire on the mainland and hanging out in Sannochie on Arran.

Map updated 13/05/19  Eric is back nesting on Pladda.  His foraging trips take him onto mainland South Ayrshire and he is frequenting alot of the sites he used last year. 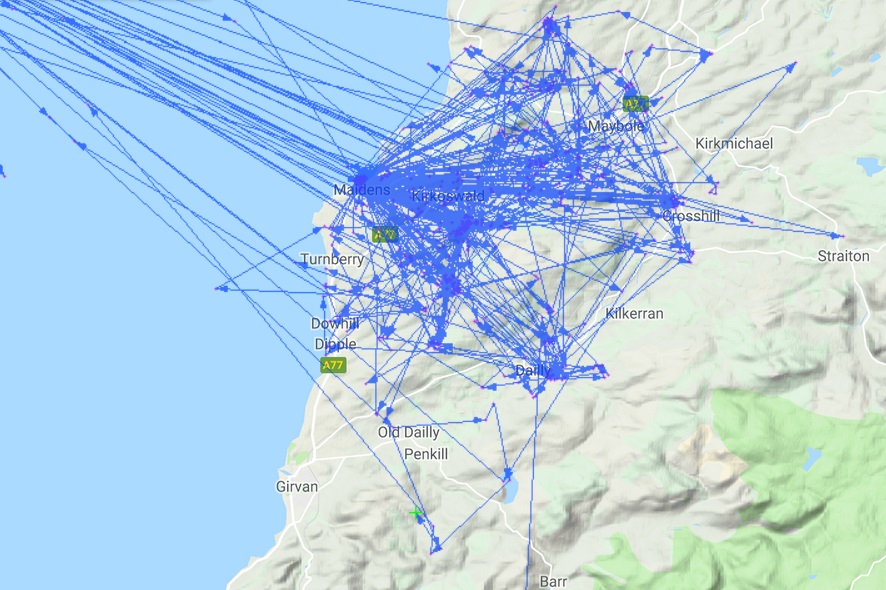 Map updated 12/06/19 Eric definetly looks to be rearing chicks as he regularly spends time on Pladda and then travels over to the mainland to feed.  He’s spending the majority of his foraging time in fields where he will be collecting worms and other bits and pieces when the farmers go about their work.

Map updated 28/06/19 Eric is still continuing his usual foraging pattern spending time on Pladda with his chicks and heading over to Arran and Ayrshire for food. 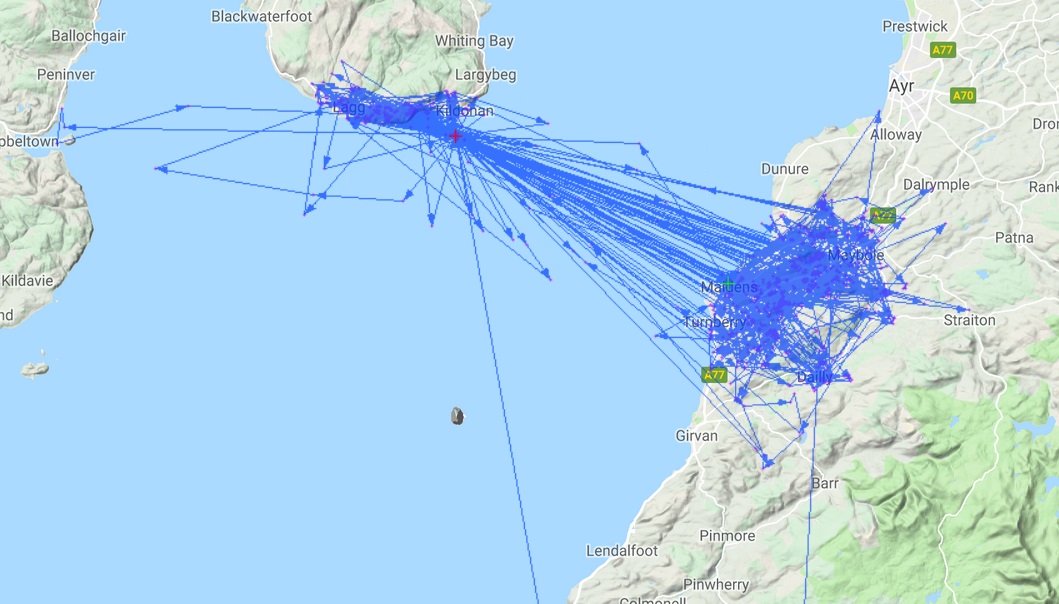 Map updated 01/08/19  Eric is now spending more time foraging on the mainland in South Ayrshire.  He spends most of his time in the fields and no doubt will be following the tractors as the silage is cut.  Large congregations of gulls can be seen on farmland at this time of year.

Map updated 12/08/19 No change with Eric.  He is still in South Ayrshire.  Eric stayed with us until October last year.  Will he do the same this year?

Would you like to adopt Eric and see your name here?  Then found out how you can adopt him here