Archie is an adult male Lesser Black-backed Gull   He was caught using a special type of net called a whoosh net with the help of the Clyde Ringing Group on the 7th of July. As he was caught at a feeding site we don’t have any evidence of nesting behaviour

but it is believed, by the movement data below, that he may have a nest in Kilmarnock or he may be a failed/non-breeder.  At the time of tagging he weighed 860g and has a wing length of 43.2cm.  Archie, like Jonathan LC Gull, also has spots in his iris but not as many suggesting he is an older bird than many of the others that we have tagged, maybe 12+ years old.

After Archie was released he stayed close to the catching site, roosting on nearby whisky bonds.  He then headed to the coast before spending time north of Kilmaurs.   He has travelled between this feeding site and Kilmarnock a couple of times before heading to Seamill.  We will keep you updated on his movements.

Map updated 08/01/18 Archie is still in the same area of France, just north of Bordeaux, as he was in December. He is our only gull to have gone to this area of France.

Map updated 18/01/18 Archie is still in Le Verdon sur Mer and we found out this week that he had been spotted by a French birdwatcher.  Unfortunately he was too far away for a photo but hopefully he will be spotted again soon.

Map updated 07/02/18 France is still proving to be poular for Archie and who can blame him with the cold front we have had in the last few weeks.  He has visited an area further south of where he usually hangs out and is probably utilising a new food source.

Map updated 15/02/18 Archie is still hanging out in his favourite spots at Le Verson Sur-Mer and with all the snow we have had here in the last week who can blame him.  The signs of spring are are starting to appear locally so it won’t be long until he gets the urge to come home.

Map updated 23/02/18 Still no change with Archie. How much is this cold front coming in from the east going to affect the migration of our gulls?

Map updated 01/03/18 Archie is still in Le Verdon-sur-Mer where it is currently 10oC. Lucky Archie!  However, Storm Emma is due to hit the region today and it will be interesting to see what affect the strong winds will have on him. 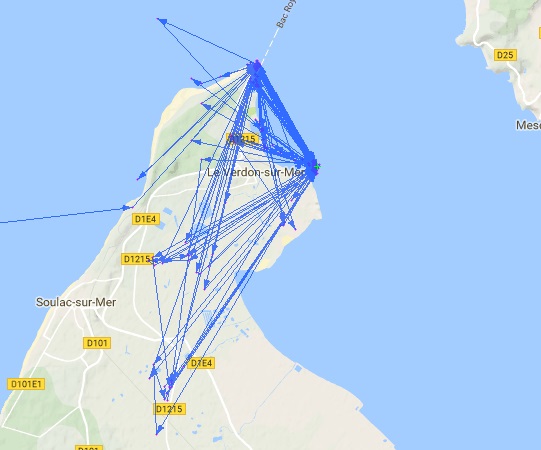 Map updated 09/03/18 Archie has has spent more time this week flying to fields to the south of the coast and foraging there.  Is this change if feeding area a sign that he will be returning soon?

Map updated 23/03/18 Archie is still in France.  His regular foraging pattern has led to three sightings of him in the region.  The recent sighting was on the 21st of March by Phillippe Birac.  Phillippe also took his photo which you can see below. 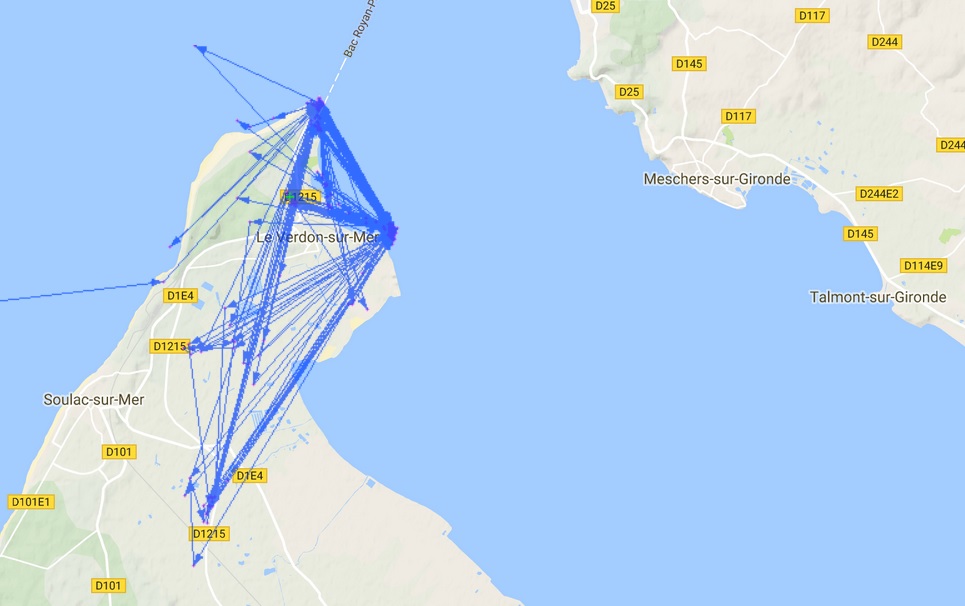 Surprise surprise Archie is still in France and to be fair we can’t blame him when it’s snowing at the office today.

Map updated 12/04/18 Archie’s map may not look any different but it’s not anything to worry about.  He is spending alot of time foraging in fields at the moment and not doing alot of travelling.


And finally we have news on Archie! After being in the Le Verdon sur-Mer area in France since the 10th of December, he finally decided to start his journey home and was recorded flying towards Bridgewater in Cornwall on the 18th of April. He had only been away for four and a half months and has had the shortest (distance) migration out of all our gulls. He arrived on the Isle of Little Cumbrae on the 21st at 0921 and is the third of our gulls to return to Scotland. It’s only taken him three days to fly from France into Cornwall then up to Anglesey before his final flight home.  Large numbers of gulls breed on the island and it’s possible that it’s also a meeting up place for them before heading to their nest sites. Last year Archie appeared to nest on the roof of Kilmarnock Train Station (we can’t be 100% sure as we caught him late on but he spent alot of time travelling back and forth from there) so we are waiting to see what he will be up to next.

Map updated 03/05/18 Archie still remains on Little Cumbrae and he may either be nesting or using the island as a roosting site.  Many of the gulls in the area are just starting to build their nests now which is about 3 weeks later than last year, probably due to the bad weather we have experienced recently.  When not on the island he heads over to Portencross to forage.

Map updated 21/05/18 Archie appears to have set up a nest on Little Cumbrae as this is where he is spending most of his time.  When he is off foraging he heads over to the mainland and hangs about near Seamill and West Kilbride.

Map updated 13/06/18  Archie has been busy foraging in alot of the same sites that he used last year.  He regularly visits Hessilhead Wildlife Rescue and has been hanging out at Kilmarnock train station.  He returns to Little Cumbrae where we believe he is nesting this year.

Map updated 26/06/18 Archie is one of 2017’s Team Gull members. Archie was our last gull to migrate last year, leaving Scotland on the 7th of December and over wintering in France at Le Verdon Sur Mer until returning to Scotland on the 21st of April. Over the last two months he has spent alot of time on Little Cumbrae and then around Kilmarnock. We have had an update this morning and we are incredibly surprised to see that Archie has left us and was last recorded in the Republic of Ireland at 2005 last night. He left Hurlford at 0406 on Saturday morning (23rd) and travelled to Stranraer where he stayed until the early hours of Sunday morning. He arrived in Northern Ireland at 0400 near to Loughries and has continued flying so far. Why is he doing this? Well it seems likely he has failed to breed this year and has decided to leave early. If he doesn’t head back he will be our first gull to migrate this year as opposed to our last one last year.

Map updated 05/07/18 Archie has been busy travelling between Northern Ireland and the Republic before spending time in Navan where many of our gulls have been to before.  He has then travelled further south and been to Lough Liffey where every single one of our gulls that have been to Ireland previously have gone too.  Why we ask? Is there lots of gulls there? Is there great foraging? He is currently at Kiltegan.

Map updated 11/07/18 Archie has spent the last 6 days going back and forth between Lough Liffey and fields near Rathdangan.

Map updated 01/08/18  We haven’t heard from Archie’s tag for a few weeks.  It is likely that his tag has stopped working so we are just waiting to find out if this is the case and will let you know.


Would you like to adopt Archie and see your name here?  Then found out how you can adopt him here