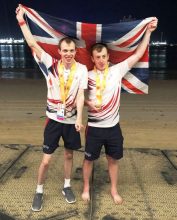 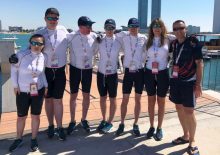 The team have done all their training at Clyde Muirshiel with Senior Instructor and Head Coach David Hill at Castle Semple Centre in Lochwinnoch.  They swapped the cold wet Scottish conditions for very hot and windy sailing on the Persian Gulf.

Bronze medallist, Jamie Cairns said: “A few days we couldn’t actually sail because it was far too windy. We capsized once only, but the water was quite warm, well very warm. It’s been an amazing experience”. 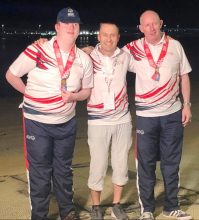 As his unified partner, Darren MacGregor (19) added: “The whole thing, the whole journey has been amazing and it has been the people that have really made it amazing.”

David Hill is also an RYA Sailability coordinator, as Competition and Coaching advisor for the team, he said “It goes without saying I’m immensely proud of the team, not just at these World Games but also the journey to get there. They have shown great commitment to this for almost 2 years now and it showed during the competition with the guys holding their own against sailors with more experience of big events.

So now, looking ahead, the challenge is to get more people into this kind of sailing, we have the boats at Castle Semple so we can develop crews for the other levels in Special Olympic Sailing.  It’s only two years till the next national games in Liverpool and four until the next World Games in Berlin 2023.”