The Regional Park traces its roots back to Abercromby in the 1940’s, however it was not formally designated until 1990. 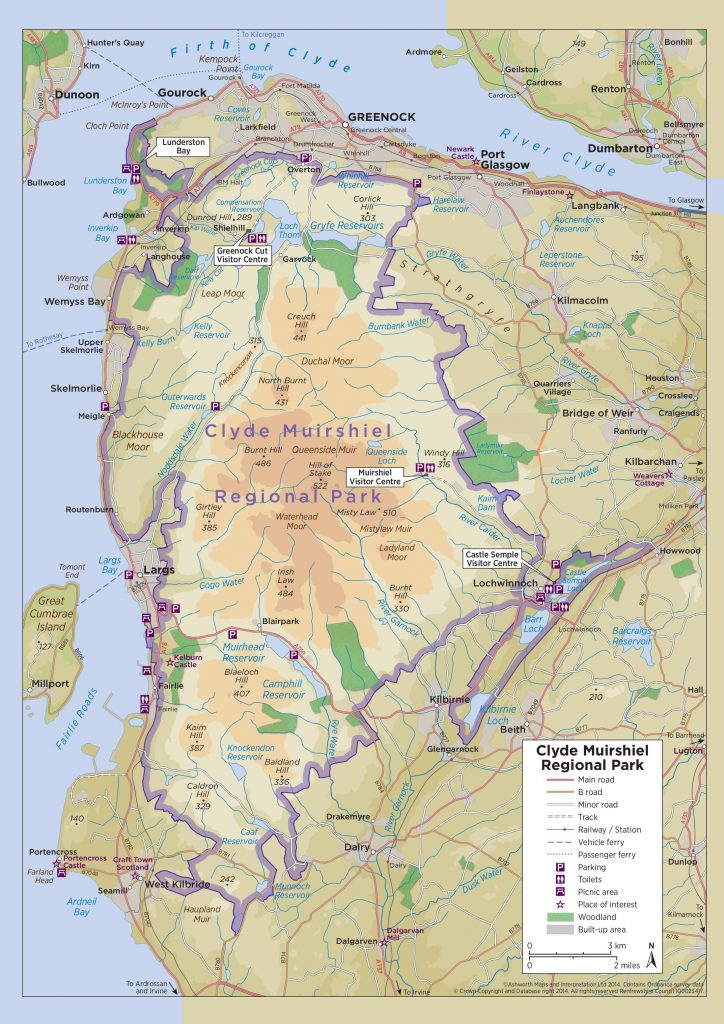 In 1947, the Clyde Valley Plan (Abercromby 1947) described the Clyde Coast from Greenock to West Kilbride as …“this section of the coast with the hill country behind it is another area of great popularity, apart from its holiday significance. It has a number of glens roaming down to the sea, an area of considerable importance to the rambler and natural historian, and its outlook to the Firth of Clyde and the grape-blue jagged peaks of Arran is of the highest order of scenic value…”

In the 1960′s Renfrew County Council proposed the Renfrewshire Regional Park and implemented a programme to manage an area of 30 000 acres (12 500 ha) including the creation of Muirshiel Country Park in June 1970. This was the blueprint for a modern day Park system in Scotland.

In 1971 Castle Semple County Park, Lochwinnoch was designated and another Visitor Centre was built at Cornalees in 1973, although it was not designated as a Country Park. It was not until December 1990 that Clyde Muirshiel Regional Park was formally designated, it covers 28 100 ha (108 sq mls or 281 sq kms).

In 1981 the Wildlife and Countryside (Scotland) Act provided the enabling legislation for Regional Parks. In this Regional Parks are defined as ‘large areas of countryside parts of which are available for informal countryside recreation’.

The policy statement on Regional Parks for Scotland by Scottish Natural Heritage points out their aims: “….to facilitate both the appropriate understandings and enjoyment of the countryside and the integration of this with the other uses of the area, such as farming, forestry and other development, with the context of maintaining and enhancing a quality natural heritage setting. This type of approach is fully consistent with thinking about countryside management, as it has development over years. Regional Parks have indeed been to the fore in applying this more integrated approach in Scotland”.

Not only is Clyde Muirshiel Regional Park at the forefront of integrated countryside management it also frequently demonstrates business excellence through awards in the Green Tourism Business Scheme and nominations in Chamber of Commerce Quality Awards for example.

In 2012 the Park’s Castle Semple Centre was designated the first RYA ‘Centre of Excellence’ in Scotland for accessible sailing, since then it has gone on to develop the accessible facilities and equipment with hand bikes and trikes.

In 2014 Waterhead Moor – Muirshiel, in the upland core of the Regional Park was identified as nationally important ‘Wild Land’ – the only ‘Wild Land’ in central Scotland.

In 2017 the Park’s Castle Semple Centre was designated as one of only two HSBC UK Disability Hubs by Scottish Cycling in recognition of the Park’s varied cycle equipment, specially trained staff and commitment to paracycling development as part of a fully inclusive outdoor activity programme.