On Sunday 3rd September the waters of Castle Semple Loch, Lochwinnoch were once again draped in colour and enthusiasm as the sailors of the West of Scotland Sailability team took to the water to compete in the Scottish Multi-Class Regatta. The event is part of the ongoing legacy of Glasgow 2014 when children and adults from local special schools and centres helped put disability sailing on the map confirming Castle Semple Centre’s designation as a Sailability Centre of Excellence.

The Regatta, featured many of the hansa 303 accessible sailing boats as well as 203’s and Challengers. A pre-race training day with Clyde Muirshiel’s experienced Outdoor Activity Instructors took place on the Saturday.

After 4 races the Hansa 303 double class was won by Darren McGregor and Jamie Cairns, with Mick Kelly and Lewis Nicolson finishing second and Shannon McGhee and Laura Carrick in third. The same group represented Scotland West at the Special Olympics in Sheffield this summer, they brought home two silver medals and a bronze! 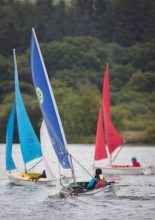 Clyde Muirshiel has a wide range of adaptive kit and knowledgeable Instructors with a fantastic history of making everyone feel comfortable on the water no matter what their ability, disability or experience of sailing. If you would like to try sailing or bring an organised group to Castle Semple for some sailing or other accessible sports then contact the Centre on 01505 842 882 and maybe we will see you at the Sailability Spring Regatta or the Scottish Multi-Class 2018!