- in support of Erskine Veterans 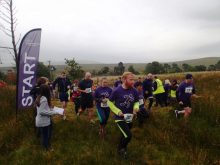 The second Clyde Muirshiel Regional Park ‘Bog Stomp’ on Sunday 3th September saw nearly double the numbers taking part compared to the inaugural event in 2016. The run was a 10km route up the steep Dunrod Hill, through bog and mud, all with stunning views despite the weather across the Inverclyde Hills over the River Clyde to the Arrochar Alps and beyond. The run started from the Park’s Greenock Cut Visitor Centre and was in support of Erskine veterans. 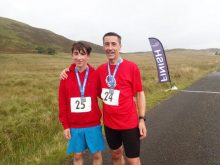 The first male across the line, was again, Kieran Cooper, from Glasgow completing the course in 42 minutes and 30 seconds soon followed, again(!) by his father Richard Cooper in exactly 45 minutes and 23 seconds. First female over the line was again Sue Hewitson of the Greenock Glenpark Harriers in an impressive time of 54 minutes and 54 seconds.

The most travelled runners on the day came from Hong Kong,
To Szewing said “We have been on holiday in Scotland and were absolutely delighted to fine this event on, we were so pleased to be able to experience the wonderful hills of Scotland in this way. Everyone was so welcoming, it really was a memorable day:

Bill Duff, a veteran himself is a member of the Falkland Runners in Fife, this 10k run was part of his challenge to do 100 runs in 365 days for the ABF The Soldiers’ Charity because he is still able to run. Bill said “Brilliant race, challenging course but an awesome route. Many thanks to the race director and his fantastic team for great race in the hills. Definitely be back next year.”

Stephen Wilson from Bearsden said “Had great fun at “Bog Stomp” 10 K at @Clydemuirshiel. The “hard at start, easier at end” course is psychologically perfect! Either by accident or by design this format means that everyone (including me!) finished with a smile on their face! I very much hope to run the race again next year.”

Not everyone had superfast times but it is the taking part that counts – some folk took at least 2 hours to complete the course, some took time to get selfies,

others completed as a team eg Clydebank High School, some were in fancy dress. 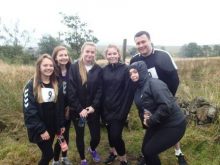 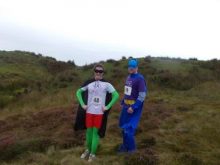