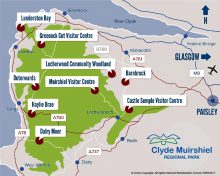 
By bicycle:
Sustrans National Cycle Route 75 passes through the site.

By train:
Glasgow Central–Inverkip (Wemyss Bay line). The station is 4km from the site, so taking a bicycle might make this journey easier: on exiting the station, head north on Station Avenue, turn right on to Main Street and right again on to the A78/Inverkip Road – at the roundabout turn left along Cloch Road for 1.5km.

By bus:
McGill’s 901 (Glasgow Buchanan Bus Station–Largs) passes the entrance to the car park: on the coastal road A770 (Cloch Road) opposite Cardwell Garden Centre and marked with a small brown sign saying ‘picnic site’.